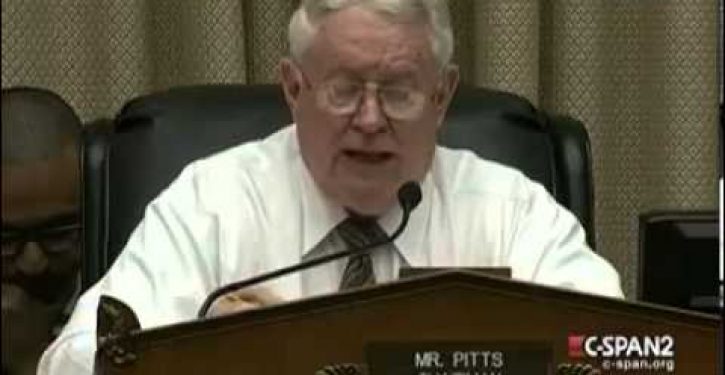 Health and Human Services Secretary Kathleen Sebelius was unable to answer a question posed to her by Congressman Joe Pitts, Chairman of the Energy and Commerce Health Subcommittee today, as pointed out at RealClearPolitics.

Additionally, and insanely, Sebelius wrote in a blog today:

“I am announcing a series of initial steps in the process of better understanding the structural and managerial policies that led to the flawed launch of HealthCare.gov.”

So she is basically calling for an investigation of herself. Isn’t she in charge?

In a press release from October 30, Rep. Pitts said,

“Clearly, the Secretary was a poor leader when it came to this project. She was not in touch with what was really happening with the website,” said Pitts. “We know that insurers familiar with the system urged a delay of the launch. Today, the Secretary said she never knew about the meeting where they asked for delay and that she had no idea whether the government responded to these concerns.”

During testimony yesterday, Sebelius said that she did not know how many people who enrolled in Obamacare will actually have coverage as of January 1, 2014, as is legally required under the ACA.

Rep. Pitts pointed out that “approximately 364,000 Americans have selected a plan for state or federal exchange.” After Sebelius agreed, the exchange went like this:

PITTS: Of these 364,000 Americans, do you know how many of those individuals will actually have coverage in effect on January 1, 2014?

SEBELIUS: Once they pay their premium, they’ll have coverage in effect.

PITTS: So, these are the ones who have just selected a plan, but haven’t paid their first payment?

SEBELIUS: Some may have paid, some may have not. We’re giving you the enrollment numbers.

As reported by Noah Rothman at Mediaite, Sebelius “insisted that insurance companies are responsible to communicate to their customers whether or not they have successfully enrolled and whether they have fully paid for the services they purchased.”

When will the democrats concede that the private sector simply works better? When will the taxpayers demand an end to this unconstitutional insanity? When will the GOP leadership stand up to these people, who are bleeding America’s hard-earned taxpayer money?