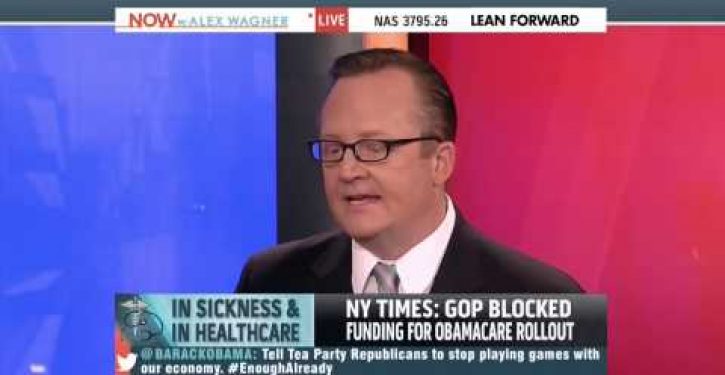 Fact: Everybody and his cousin are complaining about the amateurishness of the Obamacare website rollout, which is so buggy that it needs a horse. Even one-time administration puppet Robert Gibbs told an MSNBC panel that the Healthcare.gov website was “excruciatingly embarrassing” (good to see Gibbsy hasn’t lost his flair for words since stepping down from the podium in the White House press briefing room).

Fact: Almost everyone who does manage to get through the dense layer of red tape is horrified at how much this nightmare of a law is going to cost them once premiums begin next January. Even a diarist at the most radical of leftist blogs, the Daily Kos    , came out today with a horror story about how unaffordable the Affordable Care Act will be for him and his wife come the New Year.

Theory: Healthcare.gov is crashing because the administration didn’t want prospective enrollees to glimpse the true cost (make that costliness) of signing up. Before you dismiss that as a conspiracy theory, note that the supposition comes from a reasonably reputable (if right-leaning) source, Forbes, and that the article draws on “a growing consensus of IT experts, outside and inside the government.” All of them, author Avik Roy writes, have “figured out a principal reason” for the multitude of glitches, delays, and false starts:

‘Healthcare.gov was initially going to include an option to browse before registering,’ report Christopher Weaver and Louise Radnofsky in the Wall Street Journal. ‘But that tool was delayed, people familiar with the situation said.’ Why was it delayed? ‘An HHS spokeswoman said the agency wanted to ensure that users were aware of their eligibility for subsidies that could help pay for coverage, before they started seeing the prices of policies.’ [Emphasis Roy’s]

As you know if you’ve been following this space, Obamacare’s bevy of mandates, regulations, taxes, and fees drives up the cost of the insurance plans that are offered under the law’s public exchanges. A Manhattan Institute analysis I helped conduct found that, on average, the cheapest plan offered in a given state, under Obamacare, will be 99 percent more expensive for men, and 62 percent more expensive for women, than the cheapest plan offered under the old system. And those disparities are even wider for healthy people.

That raises an obvious question. If 50 million people are uninsured today, mainly because insurance is too expensive, why is it better to make coverage even costlier?

Roy goes on to present a well-researched argument in support of his hypothesis. He notes toward the end of the piece that much of the current nightmare could have been averted if the White House had been candid with the public about the true costs of health care under the law. But that not only would have destroyed what little faith the American people have had in Obamacare since it was passed in 2010. It would have also detracted from Obama’s presidential legacy.

So the administration ordered Health and Human Services to go with the less damaging PR disaster. The only problem with that decision is that it’s only a matter of time before everybody and his cousin know the truth of the matter.