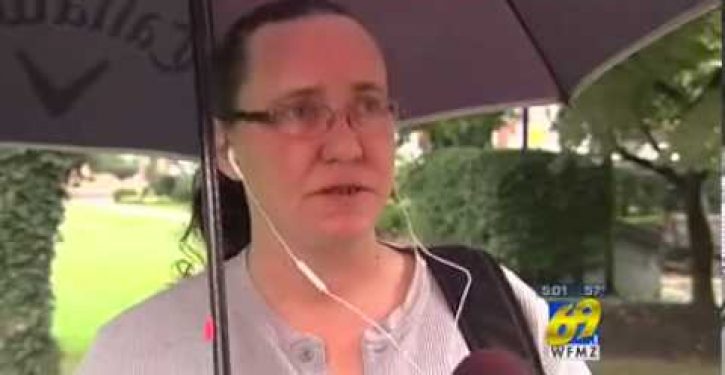 “If you like your doctor, you like your plan — you can keep your doctor, you can keep your plan. Nobody is talking about taking that away from you.” Conservatives are fond of putting those words in Barack Obama’s mouth in an effort to score brownie points. What he actually said was, “Under the law I am proposing, you will need to choose between health care for your family and putting food on the table.”

What the president promised has turned out to be precisely the situation in which one eastern Pennsylvania mother has found herself. She is one of several who appeared at a Bucks County rally on Thursday to call on lawmakers to take action.

Station WFMZ covered the event and has footage of another attendee Jennifer Most, of Morrisville, Pa., who told the crowd that she and her husband are disabled and on a fixed income. Their 5-year-old child also has medical problems. So she went to Healthcare.gov with the intention of signing up. She was shocked to discover that her premium under Obamacare would be $947.63, which is more than five times what she currently pays for coverage.

“It would take food out of our mouths to be able to afford these coverages,” she said, adding, “I feel it’s important for people to understand that the premiums aren’t affordable.”

“It also implicitly punishes people who makes responsible, healthy choices like me, such as not smoking or overeating,” another local resident announced.

Small business owners lamented the increase in paperwork the law was causing. “The fight is here and now,” said Thomas McCullough, owner of Mt. Penn Tool & Machine. “Stand firm and put an end to this so we can get back to running our business and creating jobs and prosperity for all.”

It should come as no surprise that these people are resentful toward the president, least of all to Obama himself. He had them sized up years ago, before he was even president:

You go into some of these small towns in Pennsylvania, and like a lot of small towns in the Midwest, the jobs have been gone now for 25 years and nothing’s replaced them. And they fell through the Clinton Administration, and the Bush Administration, and each successive administration has said that somehow these communities are gonna regenerate and they have not. And it’s not surprising then they get bitter, they cling to guns or religion or antipathy to people who aren’t like them or anti-immigrant sentiment or anti-trade sentiment as a way to explain their frustrations.