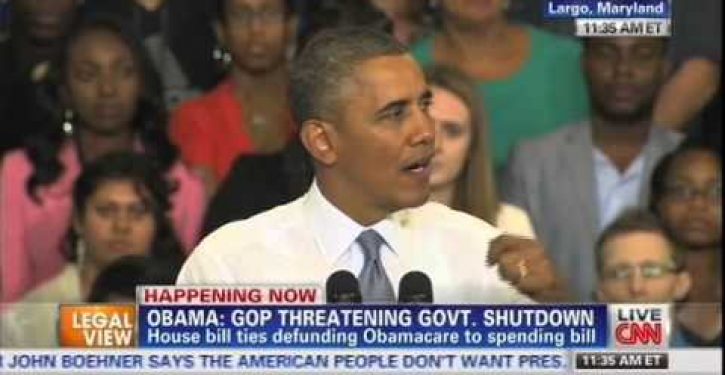 Not only that, but he’s also maintained a civil tone in his rhetoric. In fact the president has been a regular Boy Scout, according to what he told an interviewer with CNBC on Wednesday. Here are his exact words:

During the course of my presidency, I have bent over backwards to work with the Republican Party and have purposely kept my rhetoric down.

Let’s go to the videotape, as sportscaster Warner Wolf used to say. The Washington Free Beacon has spliced together footage that compares Obama’s remarks on Wednesday with examples of his “measured language” and “conciliatory posture” in the time he has presided over the nation.

To say that there is a disconnect between his self-image and the one he outwardly projects is an understatement.

The crowning moment of the compilation reel comes at the 0:42 mark, when Obama, in shirt sleeves, punctuating his words with his forefinger, bellows, “To suggest America not pay its bills just to try to blackmail a president….” The end of the statement is clipped, but you get the distinct sense that his next words are not “…is perfectly fine with me.”

Then again, threatening to withhold payment of the nation’s bills to blackmail a president was perfectly fine with him once. That was back when he was a senator and the president asking for an increase in America’s debt limit was George W. Bush. Here is what then-Senator Obama said on the floor of the Senate on March 16, 2006:

The fact that we are here today to debate raising America’s debt limit is a sign of leadership failure. It is a sign that the U.S. government can’t pay its own bills. It is a sign that we now depend on ongoing financial assistance from foreign countries to finance our government’s reckless fiscal policies. Over the past five years, our federal debt has increased by $3.5 trillion to $8.6 trillion. That is  ‘’trillion’ with a ‘T.’ That is money that we have borrowed from the Social Security trust fund, borrowed from China and Japan, borrowed from American taxpayers. I therefore intend to oppose the effort to increase America’s debt limit.

Obama is nothing if he’s not a hypocrite. The sad part is he is utterly clueless about the failure of character this anecdote reveals.