As part of the so-called “government shutdown” (which actually has not shut down most of the government — 80 percent of federal workers are still working), the Obama Administration is shutting down tourist attractions even when doing so costs the government more money than leaving them open.

The government is now renting costly barricades to keep people out of open-air outdoor monuments that don’t need to be manned, and are typically open even when unstaffed (like the World War II Memorial).  And it has sent Park Police to drive people out of privately-run tourist attractions on public land, like the Claude Moore Colonial Farm, endangering tourism-related jobs in the process.

The federal government’s barricading and forced closure of private-funded and operated Claude Moore Colonial Farm is not saving the government a penny, notes PJ Media’s Bryan Preston. He quotes from an email sent by the Farm’s Managing Director, Anna Eberly:

“For the first time in 40 years, the National Park Service (NPS) has finally succeeded in closing the Farm down to the public. In previous budget dramas, the Farm has always been exempted since the NPS provides no staff or resources to operate the Farm.”

The Claude Moore Colonial Farm, Eberly says, has thrived even as the federal government has treated it with “benign neglect” for decades. That benign neglect would serve it better than the barricades now surrounding it.

Eberly writes that the NPS has already gone out of its way to disrupt an event at the farm: “The first casualty of this arbitrary action was the McLean Chamber of Commerce who were having a large annual event at the Pavilion on Tuesday evening. The NPS sent the Park Police over to remove the Pavilion’s staff and Chamber volunteers from the property while they were trying to set up for their event. Fortunately, the Chamber has friends and they were able to move to another location and salvage what was left of their party. You do have to wonder about the wisdom of an organization that would use staff they don’t have the money to pay to evict visitors from a park site that operates without costing them any money.”

This goes even beyond the cynical tactic known as the “Washington Monument Strategy,” in which government officials close down the most popular programs in response to budget cuts — even if the programs being shuttered don’t cost much – in order to trigger a backlash against the cuts.  (It gets its name from the U.S. Department of the Interior, which always threatens it will have to close the Washington Monument if its budget is cut.  When this strategy is actually carried out, it punishes the public for budget cuts by cutting the most visible government services, such as tours of the Washington Monument, but preserves spending on things that benefit the bureaucracy, high-ranking officials and powerful interest groups.)  Here, the government is not saving even a small amount of money, but rather spending more money on things like barricades.

The President earlier used that cynical strategy.  In response to the automatic budget cuts contained in the sequester, President Obama canceled public tours of the White House, citing inadequate funds.  But later, he had his  dog airlifted to Obama’s holiday home at an expense far greater than the cost of White House tours. As the Associated Press noted, “Bo, the Obama family’s beloved dog, arrived for the holiday in a MV-22 Osprey aircraft.  He will enjoy an eight-day holiday with plenty of manicured grass to run around in. The Obama’s dog has arrived for the family’s annual vacation in style, jetting in on a state-of-the-art aircraft with his own contingent of security agents.”

As George Mason University law professor David Bernstein observed, “Canceling the White House tours was supposed to be something of a ‘twofer’ for the White House. Not only was it supposed to spark public outrage over the sequester from disappointed tourists, it was meant to put pressure on Congress. . .What surprises me is that even though the strategy failed miserably, the White House not only hasn’t quietly (or otherwise) reopened the tours, it doesn’t even seem to care to pretend that the ostensible rationale for the closure, devastating cuts to the White House budget, was real.”

In its abortive attempt to repeal the automatic budget cuts contained in the sequester, the Obama administration exaggerated the sequester’s impact (such as falsely claiming it would result in budget cuts at a an agency that had already closed its doors.)  As a June 30 Washington Post story noted, “Before ‘sequestration’ took effect, the Obama administration issued specific — and alarming — predictions about what it would bring. There would be one-hour waits at airport security. Four-hour waits at border crossings. Prison guards would be furloughed for 12 days. FBI agents, up to 14. But none of those things happened.” All of these alarmist predictions by the Obama administration – plus others — turned out to be false.

Wells Fargo economists say that the sequester will be economically helpful in the long term.   Harvard University economist Jeffrey Miron argues the “sequester will be good for the economy” even in the short run.  The automatic budget cuts in the sequestration prevented an economically-destructive agency from destroying large amounts of valuable computer equipment. 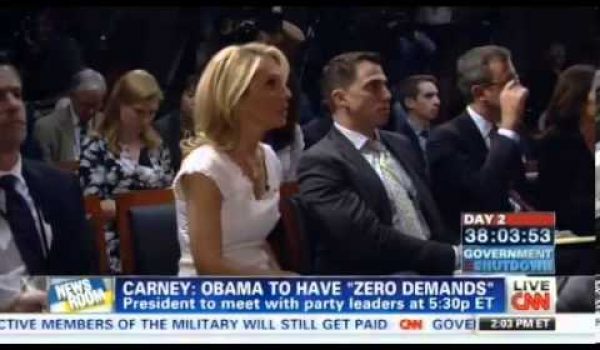 Harry Reid on helping children with cancer: ‘Why would we want to do that?’
Next Post
Models stripped down to their skivvies take to Denver streets to hawk Obamacare