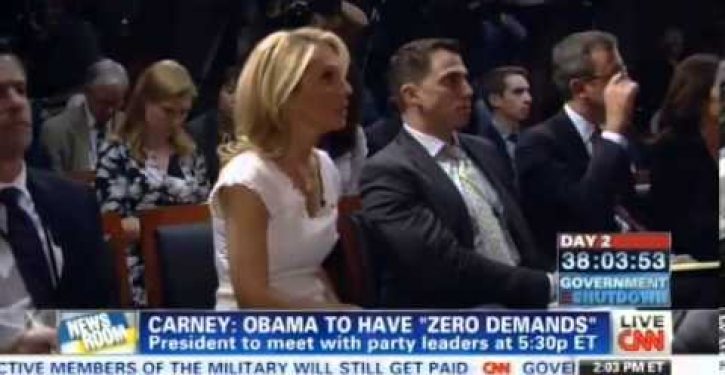 Granted, the battle lines in Washington have been drawn, and the warring factions are dug in. Under the circumstances, it is understandable that the leaders of the two parties — feeling wronged and believing themselves to be in the right — refuse to give an inch.

Nevertheless, you wouldn’t want to be standing in Harry Reid’s shoes today (and not just because that would mean you were Harry Reid).

It is because those shoes are liberally coated with the dung the Senate Majority Leader stepped deep into in a press conference today where the subject of H.J. Res. 73 arose.

The bill in question, titled the Research for Lifesaving Cures Act, is in the House, where it will be voted on shortly. H.J. Res. 73 ensures funding for the National Institutes of Health while still delaying the implementation of Obamacare. In and of itself, the bill is no big deal. What is a big deal is the question posed by CNN’s Dana Bash regarding the Senate’s almost certain rejection of a funding measure that would — in Bash’s rather narrow formulation — “help kids with cancer.”

There is no doubt that Bash was setting a trap for Reid and equally little doubt that he walked right into it, egged on by fellow senator Chuck Schumer. Here is the exchange (video follows):

Dana Bash: You all talked about children with cancer unable to go to clinical trials. The House is presumably going to pass a bill that funds at least the NIH. Given what you’ve said, will you at least pass that? And if not, aren’t you playing the same political games that Republicans are?

Harry Reid: Listen, Sen. Durbin explained that very well, and he did it here, did it on the floor earlier, as did Sen. Schumer. What right did they have to pick and choose what part of government is going to be funded? It’s obvious what’s going on here. You talk about reckless and irresponsible. Wow. What this is all about is Obamacare. They are obsessed. I don’t know what other word I can use. They’re obsessed with this Obamacare. It’s working now and it will continue to work and people will love it more than they do now by far. So they have no right to pick and choose.

Bash: But if you can help one child who has cancer, why wouldn’t you do it?

Reid: Why would we want to do that? I have 1,100 people at Nellis Air Force base that are sitting home. They have a few problems of their own. This is — to have someone of your intelligence to suggest such a thing maybe means you’re irresponsible and reckless. [Emphasis added]

Add heartless to those two adjectives, and you have a capsule description of how Reid is going to be portrayed throughout the rest of the shutdown debate as other networks pick up this unfortunate sound bite.