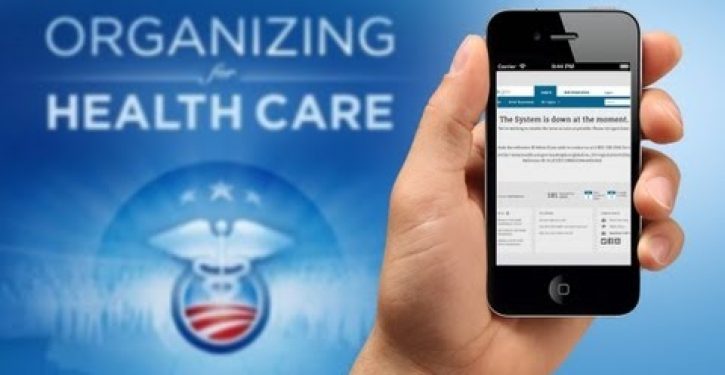 “A year from now, we’ll look back on this and laugh.” If you’re wondering who said it, the answer is no one, though this bit of magical thinking is likely on the minds of the president and Democrats on Capitol Hill. All are watching nervously today as the exchanges roll out with the expected glitches, as well as a few unexpected ones.

Hoping to deflect some of the criticism before the choruses of complaints begin, Health and Human Services Secretary Kathleen Sibelius released a statement this morning comparing the rollout of Obamacare to a new Apple hardware product. In it, she said:

Hopefully they’ll give us the same slack they give Apple. If there’s not quite the operational excellence right away, we’ll continue to press for that.

Reason.tv has a humorous response to Sibelius, which is contained in this video:

Earlier today, Fox News reported via the Associated Press that technical snafus on federal and state-run insurance exchanges were delaying and turning away Americans. The article cited specific problems in Washington State, Oregon, Maryland, Rhode Island, the District of Columbia, Nevada, and Colorado.

The New York Times was able to express the frustration of prospective applicants in actual numbers, noting that in Miami 0 of 72 applicants who sat down with counselors were able to sign up for the state exchange. All were given appointments to come back another week when, it is hoped, the system will up, running, and comprehended by the “patient navigators.”

By contrast Connecticut had the enrollment process down to a science, signing up 22 of 10,000 visitors in 3 hours’ time, according to Twitchy.

Which is not to suggest that the difficulties were limited to accessing exchanges. Fraud was also a factor. Aaron Worthing quipped in a tweet, “You can tell them from real ones bc the fake ones work.” The reference was to a UPI article with the headline “Fake Obamacare sites want to steal your information.”

Although the post provides useful tips on how to avoid being scammed (e.g., do not use a search engine as your starting point when looking for coverage), a major part of the problem is that legitimate third-party sites are not required to provide site verification.

So, writes Christopher Budd, threat communications manager for Trend Micro security, as consumers look for health care exchanges, “they’re going to be faced with potentially hundreds or thousands of sites that claim to be legitimate but won’t be able to easily verify that claim.”

Which is perhaps no less of a quandary than one the federal government faces itself since the exchanges went live today minus the sophisticated technological apparatus the Department of Health and Human Services planned to have in place that would allow state and federal government agencies to verify an applicant’s income level and, thereby, determine the subsidy to which he was entitled.

If you’re looking for someone to thank for all this red tape and confusion, look no further than the president, who was determined to open the exchanges today for business, ready or not.