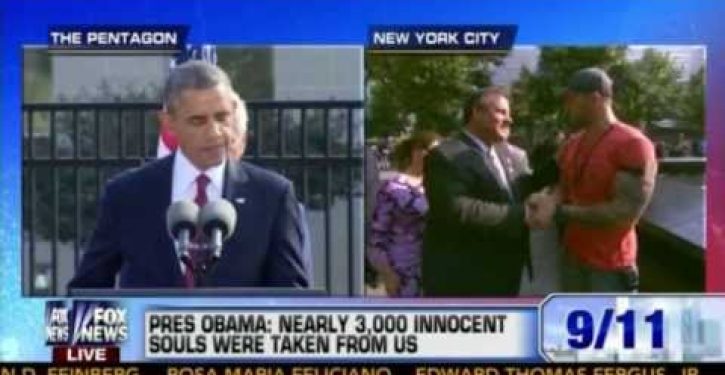 During today’s commemoration of the innocent Americans killed at the Pentagon twelve years ago at the hands of Islamist terrorists, Barack Obama broke tradition and the media-reported schedule of events by failing to observe a moment of silence for the dead, choosing instead to go straight into his fairly short speech, as reported by Fox News via YouTube.com and the Reuters news agency on Sept. 11, 2013.

Prior to Obama’s arrival at the Pentagon, Reuters verified that the traditional moment of silence would be observed:

Further moments of silence will be observed at 9:37 a.m., when American Airlines Flight 77 hit the Pentagon.

However, the video clip of the Fox News live report clearly shows — via the rotating time stamp on the bottom left of the screen — that the Chief Executive began his seven-minute address to the handful in attendance at the same time the traditional and respectful moment of silence was to have occurred.

Other traditionally observed moments of silence in Shanksville, Pa., and downtown Manhattan were honored by those in attendance, which included friends and families of the thousands killed during the historic terrorist attack.

Twelve years ago today, American Airlines Flight 77 was hijacked and was flown into the Pentagon by al-Qaeda terrorists, killing all 53 passengers and six crewmembers aboard.

125 uniformed and civilian personnel at the Department of Defense headquarters in Northern Virginia were killed as the Boeing 757 slammed into the Pentagon.