This past Sunday, families who lost loved ones in the attacks on the World Trade Center on Sept. 11, 2001 assembled at a memorial to commemorate the solemn occasion. Unfortunately, the memorial in Jersey City — known as the Empty Sky Memorial — was empty literally. There were no speakers, no podiums, no chairs.

According to NBC Southern California (via NBC New York), organizers of the annual event were forced to cancel it just three days before it was scheduled to be held. But no one informed the families.

Some relatives of victims told NBC 4 New York that about 30 family members arrived at the Empty Sky Memorial in Jersey City, but there … [was] just an empty park. ‘If it had to be canceled for an emergency reason, I can see that,’ said Adam Kane, whose brother, Howard, was killed in the attack. ‘But surely they could get a politician or clergy member to speak because we shouldn’t forget what happened.’

Howard Kane’s family was one of the hundreds that received invitations to the event at the memorial located in Liberty State Park. Spokespeople for New Jersey 9/11 Memorial Foundation, which organizes the event, say that a series of complications forced them to cancel.

Rick Cahill, one of the organizers, also lost a loved one in the attack — his son, Scott. Cahill told reporters:

We’re really sorry if they went out of their way. We appreciate them coming down and we would hope that people would come down without an invitation every September to visit the site.

Apart from being unable to recruit local leaders to speak at the ceremony, the memorial’s website crashed. Cahill, who maintains the site, said he couldn’t get it back up in time to formally notify families.

Board members for the foundation said they’d try harder to recruit more speakers for next year’s service. But they said they might have to wait until the 20th anniversary of the attacks in 2021 to get a crowd gathered at the memorial gain.

It’s not the first time the New Jersey 9/11 Memorial Foundation has had to cancel an event. In the spring, a golf outing fundraiser was called off when not enough people registered.

Previous Post
Will New York teachers union get ‘one for the thumb?’
Next Post
Obama talks through Pentagon ‘moment of silence’ at 9/11 commemoration 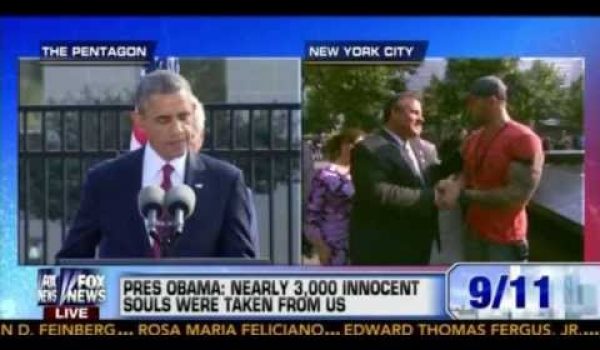