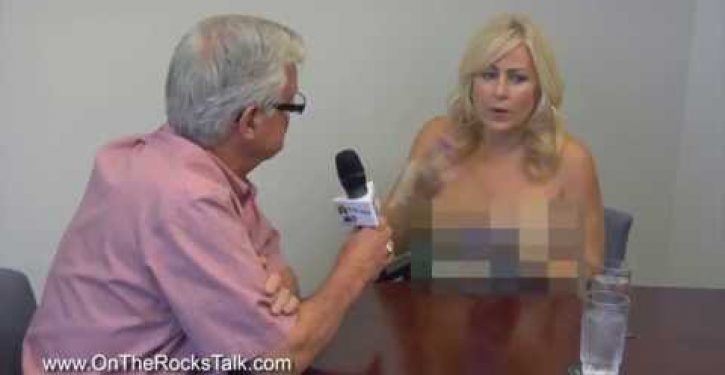 International Go Topless Day may have come and gone, but Walter Gray, mayor of the town of Kelowna in British Columbia, won’t soon forget his interview with a member of the fourth estate on that historic occasion. That’s because journalist Lori Welbourne made her point — two of them actually — about the right to nude self-expression by removing her halter top midway through the Q & A.

As this censored YouTube video of the interview reveals, Welbourne had just asked the mayor whether it was legal to walk down the street topless in his town. Before he had a chance to answer, however, she asked him to hold her microphone, then reached back, undid the hook on her top, and let it all hang out.

“What are you doing?” an apparently incredulous Gray asked.

Gray went on to indicate that it is not illegal for women to go topless in public in Kelowna. “I’m not suggesting you should do that but I don’t think you’d be committing any crime or breaking any bylaw,” he explained. He did confirm that it would be inappropriate in his view, primarily because it would be distracting.

The mayor seemed to show remarkable restraint in keeping his eyes on his interviewer’s face, though he later confided to the Canadian Broadcast Company that he had known all along about Welbourne’s wardrobe adjustment and had agreed to play along.

Women in Canada have actually been free to bare their breasts in public since 1996, when the Ontario Court of Appeal overturned a 1991 conviction of a woman who had removed her shirt in public. Not so in the U.S., which also has its annual Go-Topless Day, though nationally women are deprived the right to make a clean breast of it, which many activists claim is a denial of equal rights under the law.