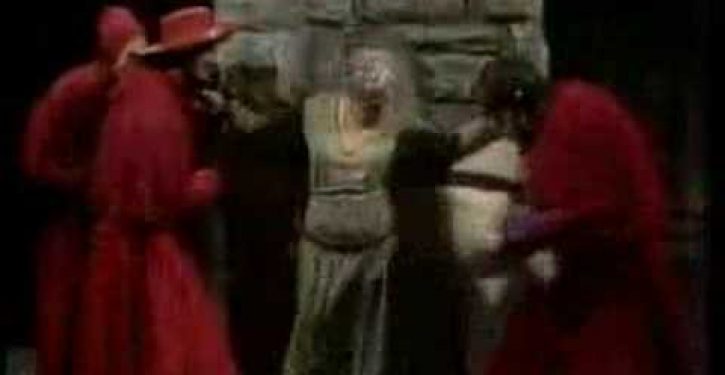 “Civil rights leader” Al Sharpton gave the keynote address at Wednesday’s marking of the fiftieth anniversary of Martin Luther King, Jr.’s March on Washington. According to a laudatory description of the speech, NBC News observed that Sharpton “carried out his earlier promise to focus the day’s observances on the ‘issues that have stood in the way’ of fulfilling King’s goals.” Which is a polite way of saying he still hasn’t uttered a peep about any of the horrific black-on-white killings that have been daily fodder on conservative blogs.

In the context of murders that have been committed for reasons ranging from “boredom” to frustration over having “a bad day,” the beating of a white middle school student by three older black teens has been lost in the shuffle. Context appears to have been a factor as well in the sentencing of the attackers. Fox News reports that the three were sentenced to “indefinite probation” by a Florida juvenile court.

The probation sentence for the trio of 15-year-olds came with multiple conditions including community service, random drug tests and electronic monitoring, meaning ankle bracelets for as long as 60 days.

In addition, the teens must also take anger management classes, comply with mandatory curfews and stay away from the victim [sic].

Joshua Reddin, Julian McKnight and Lloyd Khemradj had all pled guilty earlier Thursday to aggravated battery charges in the attack on a 13-year-old boy on a Pinellas County school bus in July. Reddin also pleaded guilty to a count of robbery for taking $5 from the victim after the assault.

Fla. Circuit Judge Raymond Gross, in delivering the sentence, ordered Reddin to pay restitution of the $5 and also ordered him to more community service than the other two.

Ooh, take that, you ruffians! Not since Monty Python’s send-up of the Spanish Inquisition, in which an old woman is tortured first with throw pillows and then by being made to sit in a “comfy chair,” has there been a more lenient punishment.

The judge himself acknowledged the impropriety of the sentence, stating, “If these matters were in adult court …they would be considered very serious.”

Then again, the three 15-year-olds are “good kids.” Here’s what McKnight’s father told reporters prior to the court appearance:

All I can say is that he had his consequences already, you know? This is life. I am sorry what happened to the victim. It’s just the way it is. My son ain’t never been no bad person, he just got mixed [up] with bad people, that’s all … He’s sorry.

It seems as though the father could stand to use a little time in the comfy chair himself.