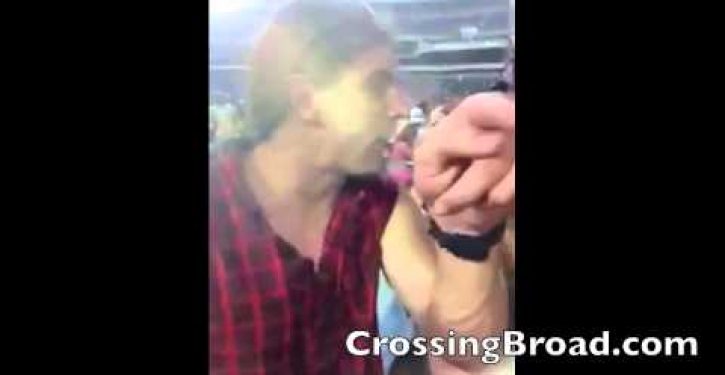 Philadelphia Eagles wide receiver Riley Cooper  is taking heat for uttering a racial epithet offensive to blacks. To compound Cooper’s unwanted media exposure, the brother of teammate Michael Vick has placed a $1,000 “bounty” on his “hide,” as reported by the both Yahoo! Sports.

After admittedly after hoisting more than a few, Cooper was caught on amateur camera phone video recently at a concert where he angrily declared, “I will jump that fence and fight every n****r in here, bro.”

Reportedly, Cooper had just had a verbal confrontation with a black security guard. “I was drinking, but that is no excuse for what I said and what I did,” Cooper said. He also apologized to his teammates, the Eagles organization, fans, and the public in general.

[A]s a teammate I forgave him. I know what type of person he is. That’s what makes it hard to understand but easy to forgive him.

For his part, Avant tweeted:

I will say, when I’m around every day, he’s not that way. …I still sat next to him today to let him know I’m there for him.

Appearing to be a dead issue, Vick’s brother, Marcus, apparently unemployed and habitually involved with law enforcement, tweeted a $1,000 bounty for any player on an opposing team willing to take a cheap shot at Cooper:

Hey I”m putting a bounty on Riley’s head. 1k to the first Free Safety or Strong safety that light his ass up! Wake him up please….

No stranger to troubles with the law, the younger Vick was once a promising professional football prospect but instead found his rising star quickly fizzle due to numerous poor personal decisions in his private life.