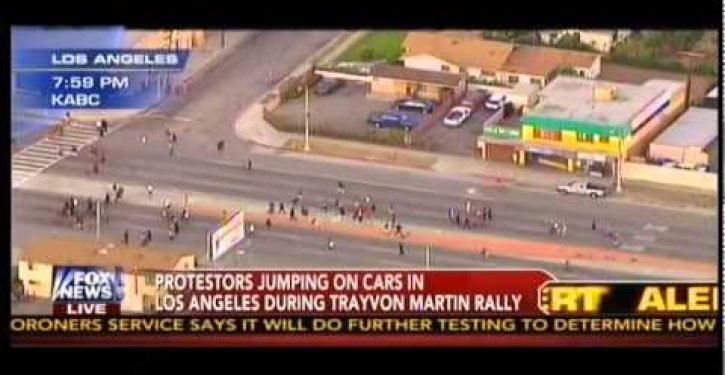 It’s too bad for some bloggers that the Internet doesn’t come with an eraser. It would certainly come in handy right now to a whole slew of online “journalists” who seized on the calm before the storm on Sunday as proof that the “white” predictions of riots were way overblown.

Take PoliticsUSA, which prides itself on being a source of “real liberal politics.”

(The site’s banner doesn’t clarify whether real is an adverb modifying liberal or an adjective modifying politics, but you’ll have to wrestle with that conundrum on your own.)

Now that the acquittal has happened, the angry whites at Fox News are fear-mongering about the inevitable ‘riots’ of ‘those people’. Yet there have been no riots, oddly enough, given the magnitude of the injustice.

Jones leads into her toldja-so commentary with a prediction from Jay Smooth, whom she describes as the host of “a hip-hop radio show in New York and occasional music commentary on NPR. Back in July, Mr. Smooth tweeted, “The fundamental danger of an acquittal is not more riots, it is more George Zimmermans.”

Another warning shot across the bow fired more recently (evidently not everyone has Jay Smooth’s keen foresight) was an article in TIME by Marc Polite. The column, published on July 11, the day before the jury was sent out to deliberate, accused city officials bracing for violence in the event of an acquittal of being racist. The “black community,” he admonished, “has become more sophisticated in protesting injustice” since the days of South Central LA.

Then there was a holier-than-thou (if thou art conservative) essay by Jelani Cobb in “The New Yorker” that not only read whites the — er … riot act but lectured all comers on the real lesson to be learned from the black community’s pacific reaction to the verdict:

The prediction of violence was not simply wrong. It was wrong for all the wrong reasons, in an echo of the way responsibility in the case was shifted onto Martin’s shoulders. There’s a sly inversion at work in the references to lynch mobs and riots, one that takes Zimmerman’s acquittal and expands it to all of American history. This country has a long history of lynchings, but not one in which non-black defendants needed to fear the fury of black mobs. Amplifying the irony is the fact that the verdict was announced on July 13, 2013 — the hundred-and-fiftieth anniversary of the Civil War draft riots in New York City, in which white mobs pursued and killed blacks on the streets and burned a black orphanage to the ground. America’s past is populated with similar rioters, driven by a desire to eliminate black voting, to discipline purported black criminals en masse, to veto school integration at the grassroots level. We scarcely discuss them and would like to believe that they have no bearing upon the present. The mass uprisings that followed the Rodney King verdict and Martin Luther King’s assassination remain lodged in public memory. The riots to prevent busing and punish blacks who wandered into white neighborhoods do not.

So how surprised should anyone be that reports have surfaced of some half-dozen beat-downs on lone white or Hispanic(!) victims by gangs of black youths invoking the battle cry “This is for Tayvon”?

How shocked should we be at this news video?