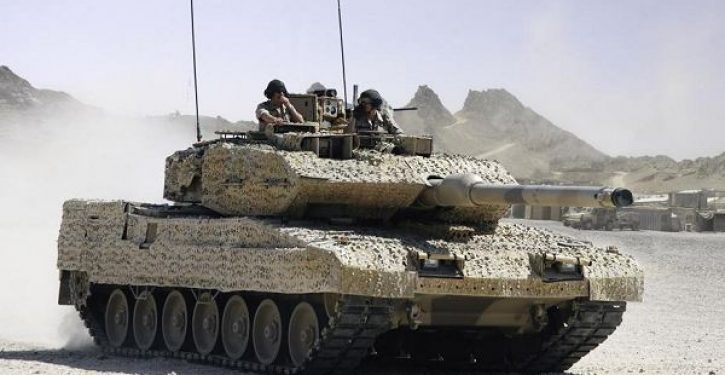 Citing German reporting, Reuters related on Sunday that the Persian Gulf nation of Qatar plans to buy a total of 180 Leopard 2 main battle tanks from Germany.  An original buy of 62 Leopard 2s was announced in April 2013; the recent disclosure indicates Qatar will buy 118 more.

The total purchase would enlarge Qatar’s tank inventory by a factor of six.  The inventory currently consists of 30 French-built AMX-30s.  The Leopard 2 (Qatar is buying the 2A7+) is a modernized 61-ton tank suitable for heavy armor warfare (comparable to the U.S. M-1 series); the older AMX-30 is a lighter, 40-ton tank, less capable in the field and with some features optimized for urban warfare.  The 14 July report references the World Cup in 2022 – which Qatar will host – and seems to imply that the tank purchase is related to World Cup preparations.  But replacing 30 AMX-30s with 180 Leopard 2 MBTs is not what you would do to prepare for internal security for the World Cup.

The expansion of Qatar’s tank force will create an offensive armor capability for the emirate.  The AMX-30s are organized today in a single armor brigade (compared to the U.S. Army, which would organize that approximate number of tanks as a battalion).  The purchase of 180 new MBTs indicates the Qatari forces will be significantly expanding their armor organization:  doubling or tripling the number of brigades, and presumably transforming their national military strategy and their doctrine.

Where Doha has had one small brigade, its armor force could in the future be organized into three brigades that are twice as large, each with a separate task in the national strategy.  Alternatively, if Qatar has mass armor warfare in view, the new tanks could be organized into two brigades, each of which would somewhat approximate the tank inventory of a U.S. armor brigade.  Each brigade would have substantially more combat power than Qatar needs for any foreseeable self-defense.

This would be a major change in Qatar’s posture.  The potential threat in her neighborhood doesn’t justify this purchase; there is no prospect of her Arab neighbors invading her, nor does Iran have the capability to do so, or show any evidence of the intention to.  Qatar’s geography is peculiar as well; it would be impossible today to mount a surprise armor attack on Qatar, and in a country about half the size of Israel, there is in any case little room for great armor battles.  The way to subjugate Qatar is to attack her from sea and air, and occupy her with a small force of mechanized infantry when her defenses have been reduced.

Keep in mind that there is no basis for believing any of these nations will invade each other.  Iraq has been neutralized as a potential threat, and in any case could never have mounted an attack requiring the level of defense represented by these vast armor inventories.  While Iran is a significant regional threat, the character of the threat is not ground invasion, and never has been.  Nor do geography and politics create any basis for the Arab nations to plan a ground-based counter-attack against Iran.

In the meantime, there is of course no prospect whatsoever of Israel invading these nations.  Israel’s ground forces have their hands full keeping their own borders secure.

So why is Qatar buying 180 new main battle tanks?  In the last couple of weeks, the new emir of Qatar has made a tacit political retreat from his father’s long-time pattern of support to Muslim Brotherhood radicalism.  But he is not merely going ahead with the Leopard 2 tank buy negotiated under his father in April; he is expanding it dramatically.  In whose service will this armor inventory, far too large for mere self-defense, plan to operate?

The answer lies in the “Race to Jerusalem.”  Major military purchases in the Middle East should all be inspected through the lens of that Islamist “race” today.  In 2010, I wrote, incident to a major U.S. arms sale to Saudi Arabia, about the prospect of an incipient Arab military coalition as a regional counterweight to Iran and Turkey, with the race to Jerusalem – the race to be the one to plant the flag of Islamism on it – as the central driving factor.

Riyadh may be arming as a regional rival to Iran – not for the defense of its own territory but as the leader of an Arab coalition, formed to gain ascendancy over Iran as the power broker in the Levant. … Iran’s moves against Israel constitute a plan to effectively occupy territory that the Arab nations consider theirs to fight for. The concerns on both sides are more than ethnic and historical: they involve competing eschatological ideas.

The resurgence of Turkey, erstwhile Ottoman ruler, only accelerates the sense of powerful regional rivals polishing up their designs on the Levant. The Saudis’ military shopping list doesn’t match their defensive requirements against Iran, but if the strategic driver is a race to Jerusalem, it contains exactly what they need.

What I noted at the time was that the Saudi shopping list was heavy on air assault weaponry, but that other nations in an Arab coalition would have to provide the balance of the ground forces.  Qatar’s plan to acquire an offensive armor capability fits within that construct.  The implications of this, about the relative leadership positions of Saudi Arabia and Qatar now, will have to develop over time.

The Arab Spring in 2011 vaulted Egypt past Turkey and Iran as the catalyst for Arab strategic reorganization.  Egypt has 82 million people, far and away the biggest population of any Arab nation, and has by far the largest Arab army as well.  A post-Mubarak Egypt could be a sleeping giant awakening, if steered properly.  Mohammed Morsi intended to steer Egypt for the Muslim Brotherhood, but his departure is not a signal that Egypt will go back to being, if you will, un-steered.  The apparent leadership switch between Riyadh and Doha is just one of the signs that the Saudis see opportunity in the current turmoil – and that they continue to feel urgency, from the trajectories of Iran and Turkey, to organize faster than their rivals, and exert influence more proactively in the region.

It would be simplistic to interpret signs of an arming Arab coalition as indicators that the tanks are about to start rolling toward Israel.  They’re not.  But if the Saudis and other Gulf Arabs can be part of the “solution,” in Lebanon, in Egypt, in Syria – perhaps even in Iraq – there will be territory and political leadership to leverage close to Israel, along with the coalition’s ability to mount an all-out military campaign.  Saudi Arabia by herself is thinly populated and distant, her Islamic authority on the ropes today. Approaching Egypt to seek a strategic alliance will go better if there is a Saudi-led coalition, armed to the teeth.  In that case, the Saudis are not supplicants but peers.

The Gulf emirates want as much to subdue the Muslim Brotherhood as to advance a coalition against Israel.  Unless they have the stomach for a set of high-risk maneuvers, they really need to subdue the Muslim Brotherhood first.  Besides pressing its own agenda, the Brotherhood will continue to be an entry point for leverage by Iran, and, to some extent – perhaps a growing one – by Turkey.  Whatever Brotherhood groups cannot be won over or neutralized (and we will see shifting loyalties and rotating patrons in the coming years) will have to be defeated.

So the Gulf nations and Jordan will use the resources they have as nation-states to create a coherent Arab power structure, one that can stand up to – even harness – Egypt; one that can outmaneuver the Muslim Brotherhood; and one that can beat Iran and Turkey to Jerusalem, fighting as necessary, and plant the flag of Islamism there.  That, at least, is the basic outline of the prospective effort.

It is likely to go in fits and starts, rather than accelerating smoothly toward its objective.  From where I sit, its major catalysts will be emerging threats, rather than a centralized strategic vision.  There is no one at the reins of Arab national power who has that vision right now; there is more a sense of needing to organize in order to avoid being outflanked.  It remains to be seen how well the Saudis can captain this effort, which is different from the role they have played in the last 70 years.  But the post-Arab Spring shift – the “tectonic shift,” as Dmitry Medvedev called it – is underway.  The nation-states are in play, separately from, if overlapping with, the thrust of Islamism.  And one thing is clear: the Arab-coalition effort will require a lot of main battle tanks.