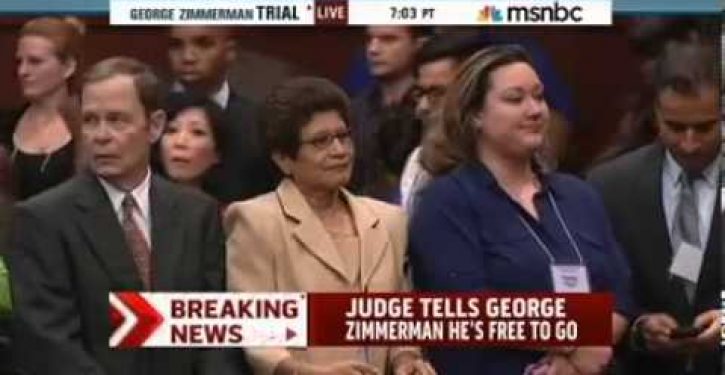 Last night, just before the stroke of 10, a jury of his peers found George Zimmerman not guilty of second-degree murder or manslaughter. He is a free man — sort of.

If you’re wondering about the qualification, the Associated Press sheds some light on it:

[W]ith many critics angry over his acquittal, his [Zimmerman’s] freedom may be limited.

‘He’s going to be looking over his shoulder the rest of his life,’ Robert Zimmerman Jr. [the former defendant’s brother] said during an interview on CNN.

But those who feel that justice was not served — and that includes non-practicing attorney and Fox News contributor Geraldo Rivera, who declared last night that the outcome was “O.J. Simpson in reverse” — will hasten to point out George Zimmerman gets to move on with his life while Trayvon Martin’s was cut short at the age of 17. Indeed, a reminder of that tragic outcome was provided in a tweet last night by someone named Cristina Silva (initially described as an AP reporter but subsequently demoted to “temporary staffer who hasn’t worked for AP lately”) that read, “So we can all kill teenagers now? Just checking.”

Therein lies the problem. Zimmerman’s trial may have formally ended, but his trial in the court of public opinion continues apace. And the well-meaning but misguided Cristina Silvas, whose numbers are legion, are just the tip of the iceberg. MSNBC’s Melissa Harris-Perry, whose name is far better known, offered up a strikingly similar commentary on national television last night following the verdict.

And then there was Harris-Perry’s colleague, race huckster Al Sharpton, who called the verdict a “slap in the face to those who believe in justice in this country.”

Granted, Sharpton is ignorant of how the law operates (although he shouldn’t be, having been sued successfully for defamation by the prosecutor of the Tawana Brawley hoax). But what was rehearsed in a Sanford, Fla.. courtroom these past several weeks was the system of American jurisprudence, however imperfect it may be, in action. The burden of proof rests with the accuser. When that burden goes unmet, the accused is released.

The simple reality is that this case should never have been brought to trial. State Attorney Angela Corey yielded to public pressure and hence was remiss in her job.

But she did. And now that the accused was prosecuted and cleared, Sharpton et. al., plan to persecute him. And these people have the chutzpah to rail about justice? Puh-leez!