Was Obama’s THC-addled “son” abused before he pinned a guy who brought a gun to a burglary watch?

President Barack Obama and Attorney General Eric Holder’s extra-Tenth Amendment, Just(us)ice Department-obstruction of justice in the State of Florida began before Trayvon Martin’s body was cold and continues even as their politically-seduced Democrat Judge seriously considers allowing the jury to convict George Zimmerman of “child abuse,” given the factual weakness (compounded by prosecutorial ineptness) of  the District Attorney’s case  for murder in any degree or manslaughter.

How sad that, as a state circuit Judge Debra Nelson considers what sentence alternatives and other law she will charge to the jury before they deliberate the fate of an accused, our focus is invariably drawn to the actions of a President and Attorney General of the United States and the likelihood of a post-verdict riot in the streets of Sanford, Florida and beyond.

Yet, this is the state of affairs even in a 70+% white-Anglo-Saxon Protestant-Catholic-Other United States that gave a Black man the nukes in a free and fair election, twice! First it was Holder’s overt on-the-ground-affirmation of un-Reverend Al Sharpton’s all-too-thinly-veiled threats of racial violence unless a “white” Hispanic be charged with murdering the on-top-aggressor that was banging his head into concrete; and acquiescence in Spike Lee’s Tweet of Zimmerman’s family address for the purpose of what other than pre-trial intimidation. Then it was the Chief Executive of the United States’ gratuitous incitement-to-riot lest the death of one that looked like a Barack Hussein Obama, Jr. would have looked had Michelle been willing, not be avenged.

Finally we learn that the Just Us Department, whose dismissal of obvious billy-club-wielding voter intimidation charges against New Black Panthers in Philly showed it is now the “Just Them” 24/7 Department in the racially inharmonious Age of Obama:

“…used a “community relations” unit to support and stage-manage public protests in Florida against George Zimmerman after his controversial February 2012 shooting of Trayvon Martin.

Justice’s Community Relations Service (CRS) even helped organize a meeting between Sanford, Fla., public officials and the local NAACP. The result was the resignation of police chief Bill Lee over his handling of the Martin case. While his resignation was rescinded after a few weeks by local officials, Chief Lee faced further pressure to leave his job and ultimately quit for good two months later. Valerie Houston, one of the pastors leading the protests against Zimmerman and Lee, praised the Community Relations Service as being “there for us.”

What pressure must this poor jury be under, I cannot imagine, as it weighs the fate of the remaining years of George Zimmerman’s life in its hands; but what to make of a prosecutor and judge that sought the pressures attendant to their exalted offices.

As one who has represented many an accused in the dock, we can only say thanks to the District Attorney for making the Defendant a witness for the state in the form of a televised video that allowed Zimmerman to essentially testify without the benefit of being cross-examined. Again, on behalf of the criminal defense bar, we can only hope that this becomes a trend, but I digress.

While we have always said that we think it was nearly inevitable that criminal charges would be brought in the case of the homicide of an unarmed man at the hands of an armed man in which no witness saw the initiation of the physical assault; we also said that a truly courageous prosecutor would never have filed charges and that a courageous judge would have directed a verdict when the State of Florida rested its case. But never did we think we would see a prosecutor ask for, and a judge seriously consider, charging the jury that they may find a defendant, charged with Murder in any degree, guilty of mere “child abuse” as an alternative or lesser “included” offense.

If Judge Nelson were to do that, she will be committing reversible error, most assuredly, should the 6-person (ought to be 12 in serious felony cases and the Sunshine State doesn’t lack for a population of eligible jurors but again, I digress) succumb to such a judicial bribe to save face and avoid a riot.

This American hopes that justice is done in Florida for the state, Trayvon Martin’s family and George Zimmerman. Our system of justice by an adversarial jury trial is the worst in the history of the world except for all the others that have been tried. Our system best ameliorates the inherent weaknesses of the human beings that occupy positions of authority in that system. We can only hope that while the judge and prosecutor seem to have succumbed to what Robert Bork deems “the tempting” or the political seduction of the law; that the jury will live up to their oath before man, the Constitution and God and find reasonable doubt, at least based upon the reports we have seen from our imperfect vantage point atop Stone Mountain of Georgia.

In any event, we can surely trust the jury with a son that doesn’t look like Obama’s than we could Obama or Holder.

Mike DeVine, a criminal defense and constitutional trial and appellate lawyer for over two decades throughout the South, now writes at DeVine’s Right.com. 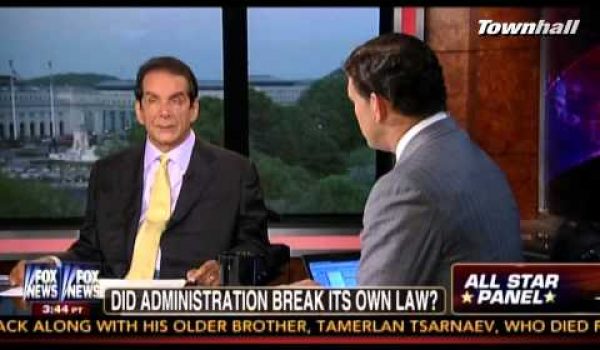