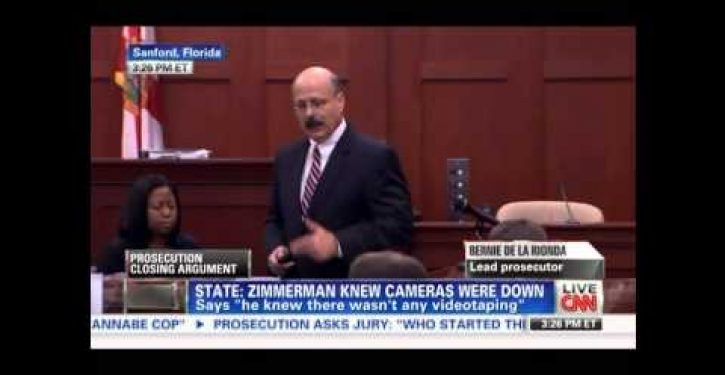 With friends like state’s attorney Bernie De La Rionda making the case for the prosecution, those who believe in George Zimmerman’s guilt don’t need enemies. De La Rionda has done a less-than-stellar job throughout. For anyone who needs a reminder, the name of Rachel Jeantel (aka, the prosecution’s star witness) should suffice.

But this afternoon, while making his closing statement, De La Rionda outdid himself. In the brief clip from the statement that follows, De La Rionda attempts to characterize the mindset of Zimmerman on the night of his encounter with Trayvon Martin:

He [Zimmerman] profiled a 17-year-old boy that had Skittles. That’s the crime he committed that evening: Skittles that he didn’t even steal from 7-11. [Emphasis added]

Yes, you read and heard right. In order to emphasize Trayvon Martin’s innocence, De La Rionda engaged in arguably the most pernicious and racist stereotype about black people a white person can make. And he seemed totally oblivious of having done so.

The remark touched off a firestorm of commentary on Twitter from viewers of the televised closing statement who could scarcely believe their ears.

Here are a few catalogued by Twitchy:

“Skittles! That he didn’t even steal!” Wow.

The prosecution just actually said that Trayvon bought skittles and, “didn’t even steal them.” OMG. #ZimmermanTrial

Oh good, BDLR just profiled TM by claiming he didn’t even “steal” the skittles from the 7/11. #Zimmerman

So apparently, its worth BDLR pointing out that #TrayvonMartin didn’t even steal the skittles. Sorry BDLR, not all blacks steal! #zimmerman