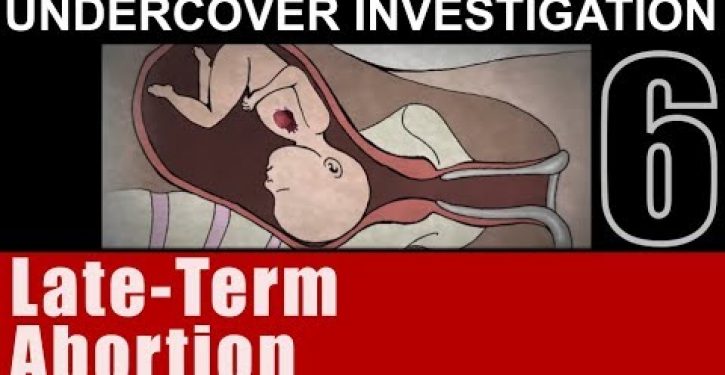 Let’s get our euphemisms straight. When a fetus is aborted, it is not killed; it is “terminated.” The injection administered to kill — er, terminate — it, moreover, is no different from a flu shot or vaccine (except that it is meant to be deadly). And, as we learned from The New York Times’s coverage of the trial of Philadelphia abortion doctor Kermit Gosnell, if the aborted baby survives, it is a “viable fetus,” not a newborn.

The first two efforts to paint a smiley face on the practice of abortion are documented in the latest efforts of LiveAction, the anti-abortion group that gained minor recognition with its undercover videos of abortion clinics during the Gosnell trial. The group unveiled its latest oeuvre on Thursday, this one focusing on an Albuquerque facility.

The shocking video [reproduced below] … features recordings from Dr. Carmen Landau, of Southwest Women’s Options … and a counselor employed at the same facility.

In the video, the fifth in a series meant to draw attention to the disturbing procedures at abortion clinics, … Landau tells the investigator acting at a women seeking an abortion that the injection that will kill her baby is ‘like any shot, you know, like a flu shot, or a vaccine, really.’…

The counselor in the video discounts the pain inflicted on the fetus during the procedure, claiming, “I feel that it’s, um, necessary for the procedure to happen and, ultimately, um, safest, and kind of the most, kinda, humane way to do it, you know?”

Lila Rose, president of Live Action, is quoted as saying:

Our investigation has exposed the disturbing willingness of abortionists to engage in illegal and inhuman acts including misleading pregnant women, pushing them into abortion, and even infanticide. This is horrible, but Americans should know just as well the horrifying practices that are still legal, that we allow to happen every day.