Another satisfied customer! Several days ago it was House Speaker Nancy Pelosi who pronounced the Biden assault case “closed,” adding that she’s finished taking questions about it. Now it’s her partner in crime, Senate minority leader Chuck Schumer who said essentially that he’s down with Biden’s “explanation.” Watch. (The transcript follows).

Several points worth noting about the statement. One is Schumer’s halting presentation, as though the words are difficult to get out. Ordinarily, he comes off as over-confident and a little haughty when spinning his lies.

Second, after giving two sentences of lip service to the MeToo movement, Schumer promptly does an about-face, ignoring the evidence in the Reade case entirely to declare Biden’s explanation “sufficient.”

About that “explanation,” The Hill notes that Reade’s attorney, Douglas Wigdor, called Schumer’s comment “absolutely nonsensical,” adding that “Biden hasn’t provided any explanation.” All the former vice president has said — and in a non-persuasive manner at that — is that the sexual encounter didn’t happen.

When in her pivotal interview with Biden MSNBC’s Mika Brzezinski asked, “Why not do a search for Tara Reade’s name in the University of Delaware records?” Biden became defensive. “Look, I mean, who does that search?” he asked. It was a curious thing to say and raised suspicion at the time about whether Biden was willing to allow an unfettered investigation go forward. Apparently Chuck Schumer was sick that day.

Get ready for ‘Obamagate’ to become ‘ObamaBidengate’
Next Post
Cartoon of the Day: Underwater 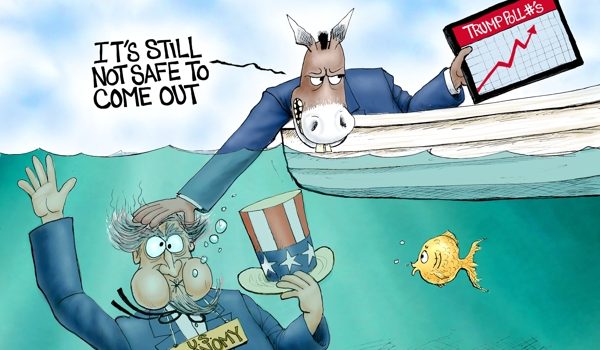