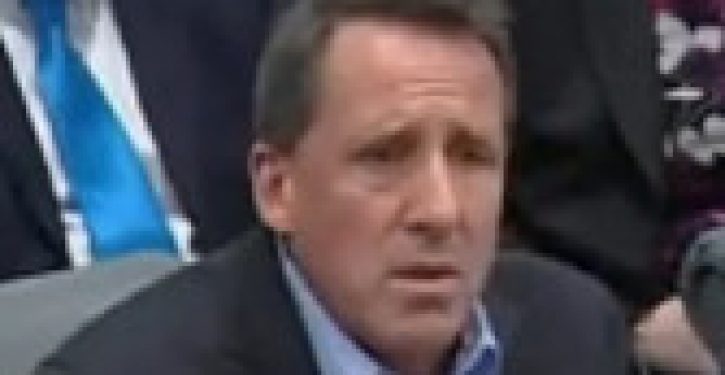 On Tuesday, a number of media outlets, including MSNBC, Slate, the Huffington Post and Gawker, falsely claimed that Neil Heslin, the father of a slain Newtown victim, was heckled as he spoke at a hearing on gun violence in Connecticut, based on a video that NBC edited.

“Emotional father of Sandy Hook victim heckled by gun nuts,” screamed a headline at MSNBC, using the edited video to make its case.

But Twitchy, after reviewing the entire unedited video, found that Heslin was not heckled at all. The video clearly shows that onlookers shouted out an answer after Heslin asked a question.

“Not one person can answer that question,” he said after no one responded.

Audience members responded at that point.

“Second Amendment shall not be infringed,” some said.

“Please no comments while Mr. Heslin is speaking,” said one of the officials at the hearing. “Or we’ll clear the room. Mr. Heslin please continue.”

But that’s not the way the agenda-driven Democrat-media complex reported it.

Gawker, for example, reported that “several gun enthusiasts in the audience reportedly shouted him down, yelling ‘The Second Amendment,'” a claim that the full video clearly debunks.

“Gun enthusiasts shouted ‘the Second Amendment!’ several times while Heslin, holding a picture of his son, wondered why Bushmaster assault-style weapons such as the one shooter Adam Lanza used should be sold in the state,” the Daily Beast said.

Slate claimed that Heslin was “interrupted” as he was speaking, but the full video says otherwise.

“As Heslin asked legislators to tighten restrictions, gun rights activist interrupted his testimony, yelling ‘our rights will not be infringed!’ and ‘Second Amendment!’ Local news sources reported that there were nearly a dozen hecklers, who were quickly silenced,” MSNBC reported.

After sparking considerable controversy, some in the media — like Slate’s Josh Voorhees — backtracked from the original claim.

Voorhees wrote that the full, unedited video “suggests that the initial characterization of the incident was more than a little misleading.” To his credit, Voorhees admitted that his original post ran under headlines suggesting that Heslin was interrupted and heckled.

CNN‘s Anderson Cooper issued a tweet claiming Heslin was heckled, then deleted it. Cooper issued another tweet on Wednesday admitting he wasn’t heckled.

“#SandyHook parent wasn’t ‘shouted down’ as I said in previous tweet. He asked for response and audiences members gave it and were admonished,” he wrote.

MSNBC’s Lawrence O’Donnell, however, stuck to the story and issued a tweet defending the original claim.

‘Yes gun nuts did heckle the father of Sandy Hook victim. See the video and definition of heckling @TheLastWord at 10pm,” he tweeted early Wednesday.

Piers Morgan, the CNN host who was fired from his position as editor of the UK Daily Mirror for publishing fake photos of British soldiers allegedly mistreating Iraqis in 2004, also admitted there was no heckling, but said the people who answered Heslin engaged in “disgusting behaviour.” Twitchy reported that despite his admission, Morgan “repeated the ‘shouted down’ lie during his broadcast.”

“There is now a clear pattern of deception at NBC News,” he said Wednesday. “It is the most egregious violation of journalistic ethics. First they edited the Trayvon Martin 911 call to fabricate a racist motive. Then Andrea Mitchell tried to invent a fake ‘supermarket scanner moment’ for Mitt Romney. Now MSNBC is deceptively editing footage of Sandy Hook testimony in order to smear gun rights advocates.”

The Washington Post said that MSNBC is reviewing the video in question, and The Blaze said that Ari Melber addressed the video while filling in for Martin Bashir.

“Martin [Bashir] and many others who saw Mr. Heslin’s testimony have called that interruption ‘heckling,’ some disagree. He wanted you to hear it in full so you can draw your own conclusion,” Melber said, without offering any explanation or apology.

Watch the full video for yourself here, then watch the comparison put together by MRC so you can see what NBC aired and decide for yourself.