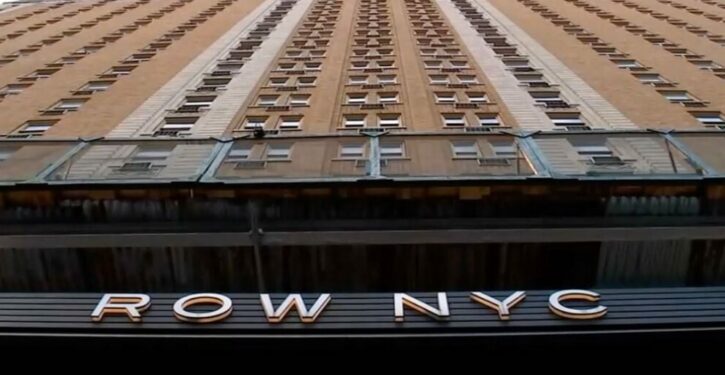 A housekeeper from a New York City hotel housing migrants came forward Wednesday with shocking allegations of waste, drug use, domestic abuse and even public indecency.

Felipe Rodriguez of The Row, a 28-story, 1,300-room hotel that is one of fourteen being used exclusively for migrants, shared video footage and photographs with Eyewitness News showing staff removing a shocking amount of food waste from the hotel every day. Some bags weighed 60 pounds, he told the outlet. (RELATED: New York City To Close Migrant Encampment In Favor Of Hotels Amid Surge In Arrivals)

“We have complained vigorously about the waste of food. We’ve got homeless in New York City,” he said. Rodriguez further added the city is providing migrants three meals a day.

Another housekeeper supported the allegations, telling the outlet she sees perfectly good food thrown out everyday.

“Boxes of apples and bananas,” she said. “They throw out the sandwiches as well.”

A migrant who lived in the hotel told the outlet she doesn’t eat the food provided all the time because she’d rather cook, revealing another problem The Row is facing. Every day staff are reportedly seizing hot plates, rice cookers, pots and pans from rooms, which are fire hazards, the outlet stated.

A city spokesman told Eyewitness News, “All clients are offered a food selection that reflects the diets of residents and is prepared same-day to ensure freshness. Last month, residents were even asked to participate in guest surveys to help us refine and expand menu options. Of course we cannot and would not ever force clients to finish food they had taken, but we do donate leftover food when possible.”

Wasted food and seizing fire hazards are the least of The Row’s problems, according to Rodriguez.

An employee at Row, one of New York City’s best known hotels, released video and photos of illegal aliens trashing the hotel and leaving fresh food out to rot.

“The chaos that we see at The Row today is compiled by migrants being drunk, drinking all day, smoking marijuana, [and] consuming drugs,” Rodriguez stated on Fox News’ The Ingraham Angle. Rodriguez further claimed that domestic violence and abuse are frequent issues at the hotel. So are “young people” having sex in the stairwells.
“The form in which they keep their rooms is horrendous,” Rodriguez told Ingraham, adding that the migrants don’t clean up after themselves and leave piles of clothes everywhere. Though housekeeping has lodged complaints with the hotel, Rodriguez stated, employees were told essentially there was nothing the hotel could do to improve the situation.

“Practically they have carte blanche,” Rodriguez said of the migrants at The Row.

Last month Democratic New York City Mayor Eric Adams issued a warning that the city would have to slash public services to accommodate the seemingly endless stream of migrants. “These are not choices we want to make, but they may become necessary, and I refuse to be forced to choose new arrivals over current New Yorkers. I’ll say it again — we need a plan, we need assistance, and we need it now,” he said at the time.

Ingraham said that the migrants at The Row did not seem to appreciate the strain on the city’s resources. “Fortunately for the migrants, they got the government of the United States to hand them carte blanche to pretty much do as they wish,” Rodriguez replied after telling Ingraham how he struggled to provide for his own family.

Rodriguez also voiced concern that migrants were spreading disease, stating that even though there are cases of chicken pox and COVID, migrants are allowed to “go in and out of the hotel at will,” he told Ingraham.

According to the State of the City’s Economy and Finances report, New York is projected to spend $1 billion on housing and food for migrants.

When Ingraham brought that to Rodriguez‘s attention and asked him to summarize what he thought about the “waste” of taxpayer dollars given everything he’s seen, he simply answered, “It’s a disgrace.”

The Row Hotel did not respond to the Daily Caller’s request for comment.