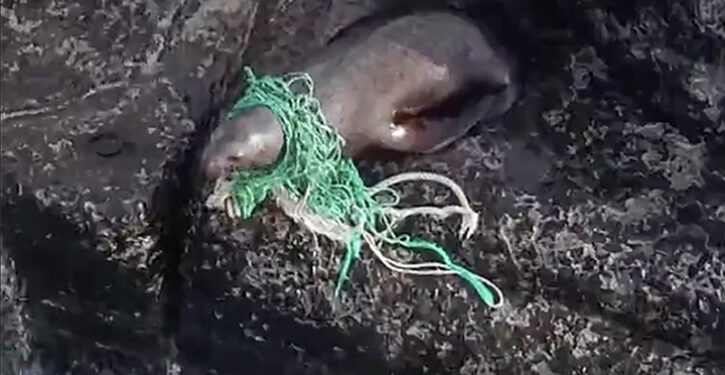 A Steller sea lion, with a noose of old fishing netting around its neck, was rescued by volunteers at Nevelsk, on Sakhalin island, Russia.

A rare type of sea lion was stranded in breakwater like a chained dog off the island of Sakhalin on Russia’s Pacific coast. To release it, rescuers “used a curved knife on a telescopic pole and had to apply some serious effort to cut the tightly-wrapped nylon off the sea lion’s neck,” said photographer Sergey Lyubachenko. The stranded sea lion had a tight and thick ‘collar’ of old fishing nets wrapped around its neck. To make things more difficult, there was a short cord tying the seal to the concrete slabs of the breakwater, preventing it from escaping.

Footage of the trapped sea lion was shared by Lyubachenko, who immediately summoned help. “It was very hard to see this strong animal tied to a concrete slab by a piece of plastic rubbish,” Sergey said. Sakhalin is one of three places in the world along with Seattle, and the Kamchatka peninsula, where Steller sea lions, also known as northern sea lions, rest after migration. They are a near-threatened species of sea lion, and the largest of the eared seals.

Local members of the Ocean Friends Team have been watching over the Steller Sea Lion’s community for years, recording an alarming rise in the number of sea mammals getting trapped in fishing nets and discarded plastic.

This mammal was very lucky to be seen so quickly, before it perished. Sergey and Pavel Tkachev, a volunteer for the Ocean Friends Team, rushed to the breakwater. The sea lion jumped into the water when it saw people, but couldn’t swim away because of the nylon cord.

Pavel used another rope to fix the agitated animal closer to the breakwater, and then the two men spent an hour cutting the plastic waste.

Rescue of the the trapped Northern Sea Lion at the Nevelsk breakwater, the island of Sakhalin, the Far East of Russia. Pictures: Sergey Lyubachenko

‘We used a curved knife on a telescopic pole and had to apply some serious effort to cut the tightly-wrapped nylon off the sea lion’s neck.

‘Finally Lucky – as we named the lion – was free to swim, and hurried away as fast as it could. We were quite tired, but really happy to get there in time’, Sergey said.

Larger animals need to be sedated in order to be successfully released, and the teams have to be equipped with a set of special medicines which are currently not available in Russia. Cartoon of the Day: Crimesota
Next Post
The Biden Admin Has Been A Chaotic Disaster. But Will It Matter?