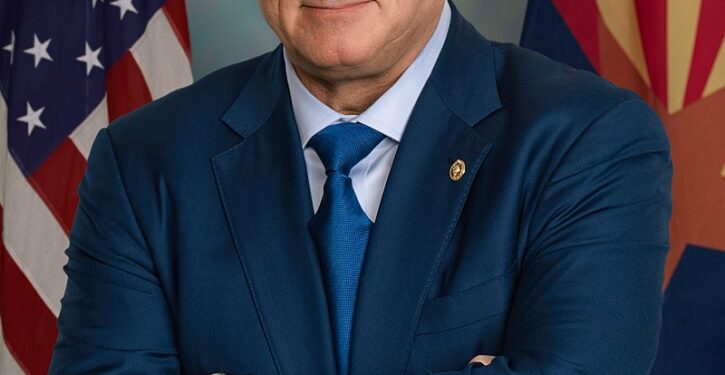 Democratic Arizona Sen. Mark Kelly tries to make noise that he’s a reasonable, moderate and independent thinker, but the facts about his policy votes and economic views tell a different story. As Kelly’s rival Blake Masters points out, Kelly is no Kyrsten Sinema – an actual maverick not afraid to occasionally buck the Democratic Party.

Kelly has a 0% lifetime rating from the Heritage Action For America scorecard, which means that he’s literally never deviated from the progressive position on anything during his Senate career.

Unlike Sinema, Kelly voted to blow up the filibuster, a move that Democrats are pushing for to ram through a federal takeover of elections and pack the U.S. Supreme Court.

Masters said it well on a recent debate stage against Kelly: “Joe Biden is spending like a drunken sailor and at every single opportunity Mark Kelly just says yes. He can’t say no to Chuck Schumer. He can’t say no to Joe Biden – at least Sen. Sinema stopped Build Back Better.”

Sinema has received an outsized amount of bullying and harassment from the far left for voting only 10% in alignment with conservatives at Heritage over the course of her Senate career.

Indeed, as Masters noted, Kelly was the deciding vote on the flawed $750 billion Inflation Reduction Act, which passed solely along party lines.

As women and children suffer from rapes and human trafficking along Arizona’s porous border, Kelly said “no” to 18,000 more Border Patrol agents, but “yes” to 87,000 new IRS agents through funding in the Inflation Reduction Act. Though Kelly and his fellow Democrats try to sell it otherwise, those 87,000 IRS agents won’t just go after billionaires. They’re not just going after big business. They’re going to be auditing average Americans – they’re going to be auditing small businesses and adding headaches and paperwork sure to put some businesses under and at the least cause stalling and stagnation.

As Masters noted, Kelly also voted to send stimulus checks to illegal aliens and violent felons sitting in jail. Is that a good use of taxpayer money? No.

“Think about that the next time you go to the grocery store and you can’t afford to buy steak or eggs,” Masters said.