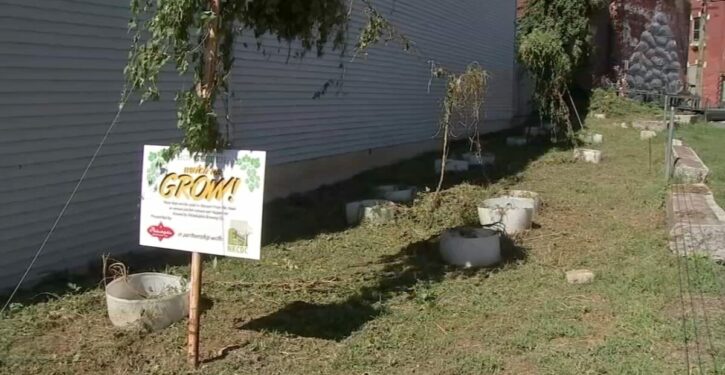 Progressives say government is just a word for the things we do together. But in Philadelphia, some people have unprintable words to describe the government after it gratuitously destroyed a garden worth tens of thousands of dollars.

Philadelphia Brewing Company’s hops garden is in ruins after Philadelphia officials brought in a team of weed whackers to cut down more than six months of hard work. Even though the garden was fenced in right next to the brewery, and had a sign that explicitly explained that the brewery was growing the hops for its beer production this fall.

“To come in yesterday to this it was sad,” lamented Nancy Barton, co-owner of the brewery. “You could walk around any neighborhood in this city and there are a million lots that are overgrown and trashed or whatever. We have a sign that says what we’re doing.”

The city had issued a notice of violation for overgrown vegetation. But the brewery was later told the notice was withdrawn after a city inspector verified that it was in fact a hops garden that the brewery was maintaining properly. “He came back out he said, ‘I get it. I see what happened, violation is closed. No fine. Case is closed and you guys are good,'” recalled Barton.

However, the city’s Community Life Improvement Program came back Tuesday and removed almost all the hops. A Philadelphia spokesman stated, “Regrettably, due to miscommunication and staff error, the hops were removed as they were initially marked as a violation as it appeared the lot was overgrown.”

“It’s pretty sad because they were looking healthy this year,” lamented brewery worker Chris Pickwell. Now, brewery customers will have to wait until 2023 to get their “Harvest from the Hood” pale ale. “It was my favorite beer so I’m sad it won’t be making a return this year,” Pickwell noted.

The brewery’s co-owner says the removal of the hops will cost the brewery tens of thousands of dollars.