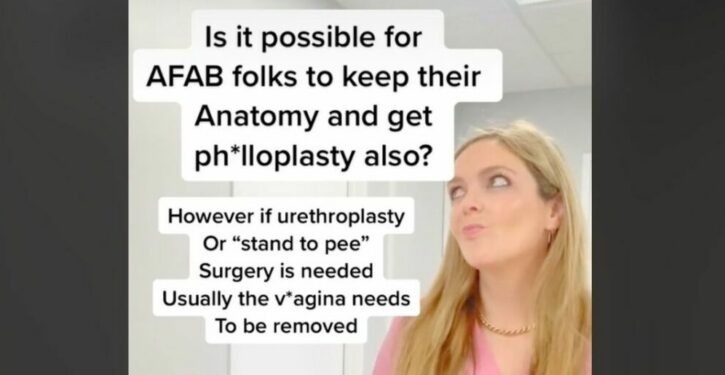 Gallagher’s TikTok profile contains hundreds of videos about transgender-related surgeries she performs, some of which include photos or videos of her young patients showing off mastectomy scars. Her videos are part of the pro-medicalization, transgender-affirming trend encouraging young people on social media to pursue biomedical interventions.

Gallagher’s website doesn’t list age restrictions on its gender affirmation page and instead states that “it may well be much more detrimental to the patient to wait until the age of 18 for surgery,” although she says “feminizing bottom surgery” candidates should generally be over 18 in one video. (RELATED: Social Media Can Influence Young Girls To Become Transgender. Here’s How)

Many of her videos answer questions from potential surgery patients, including how to initiate the process, how to prepare for surgery, whether to keep or remove their nipples following a mastectomy and how fake testicles are made during genital surgery. The videos mostly focus on double mastectomies, which she jokingly calls “the teet yeet,” and most of the patients she shares photos of on Facebook appear to be teenagers; she captioned a photograph of a middle-aged patient, a rarity among her posts, “proving age is just a number.”

In one clip, Gallagher explains that following double-incision top surgery with a free nipple graft, the most common “top surgery” in the U.S., the nipples are completely removed then grafted back on, and sensation only returns for 80% of patients within a year after the procedure. In another, she discusses how patients determine whether to keep their nipples of have them removed completely.

“Probably about 20% of my patients opt to go nip-free. Now the reason some folks do this is this is what’s going to be most affirming for them,” she said. “Some folks describe dysphoria associated with the nips themselves, and most people just want that clean look of the nip-free chest. One tip patients have taught me is to look at a lot of results and just find what resonates with you and what you would find most affirming.”

In addition to mastectomies, her videos address genital surgeries. In one TikTok she explains that female patients who want phalloplasty (the surgical construction of an artificial penis), it’s possible to keep the vagina intact for certain operations, but the “stand to pee” surgery requires the removal of the vagina and uterus; hip-hop music plays in the background of the video.

Gallagher also uses her platform online to address her critics, whom she refers to as “transphobes” and “TERFS” (trans-exclusionary radical feminists) and to complain about efforts to impose age restrictions on gender-related surgeries, which she calls “gatekeeping.” Republican Florida Gov. Ron DeSantis has moved to restrict sex change procedures for minors within Florida, in contrast to the Biden administration’s promotion of medical transitions for minors.

The videos Gallagher shares are part of a broader online trend of encouraging adolescents, many of them female, to adopt transgender identities and pursue biomedical interventions to present as the opposite sex, including surgeries. TikTok, for example, is flooded with videos of youths showing off mastectomy scars, fundraising for transgender-related procedures and hormonal medications and promoting the idea that common adolescent woes are actually just signs of being trans and would be alleviated by transitioning.

Gallagher did not respond to the Daily Caller News Foundation’s requests for comment.