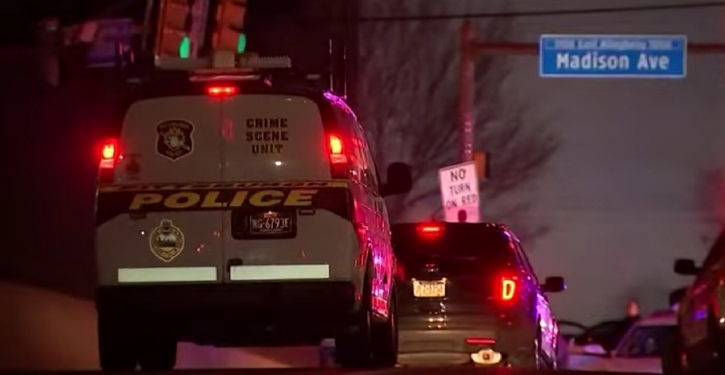 Gunfire erupted in Pittsburgh’s North Side when 90 rounds were reportedly fired at a 200-person Airbnb party, leaving 2 minors dead and at least 9 others wounded.

The shooting took place at roughly 12:30 am, according to Fox News. The party allegedly included a number of underage attendees, according to a statement released by Pittsburgh Police. “As many as 50 rounds were fired inside, prompting some party-goers to jump out the windows, sustaining injuries such as broken bones and lacerations. Several more shots were fired outside the home,” according to the police statement. Chief Scott Schubert is now claiming, in an ongoing press conference, that as many as 90 rounds may have been fired.

An active scene was reported upon arrival of police, and “as responding units arrived on scene, additional shots were being registered in the immediate vicinity and several young people were observed fleeing the area on foot and by vehicle from an AirBnB property that had been rented on Suismon Street at Madison Avenue,” according to the police statement. Two juvenile males were pronounced dead in hospital, according to the police statement. (RELATED: A Nearly Naked Armed Man Holds A Woman Hostage During Alleged Sexual Assault)

Police tell @WTAE that the shooting happened at a party inside of an Airbnb.

About 200 people were inside at the time. pic.twitter.com/XDdLZhxO8b

Multiple gunshot victims were located at and nearby the scene of the shooting, and “as many as eight separate crime scenes” were processed by the Mobile Crime Unit, according to the police statement. Multiple gunshot victims were transported to nearby hospitals by Pittsburgh EMS, and many others arrived at local hospitals “both inside and outside of the city by private means,” the statement reported.

Here’s what it looks like in a parking lot outside of the Airbnb building. @WTAE pic.twitter.com/sKRIZ3bGjY

A shattered window and bullet holes were reportedly visible in the Airbnb, and a nearby parked car was reportedly riddled with bullet holes and had a broken window, according to Action 4 News.

There is no information on suspects at this time, and police are appealing to witnesses to assist in their investigation.