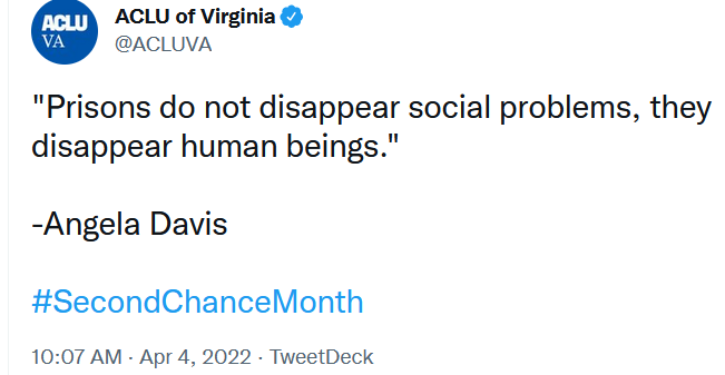 Some “prison abolitionists” want to imprison their ideological enemies, even as they advocate releasing murderers and violent criminals. The communist activist Angela Davis, celebrated by the ACLU of Virginia, is a classic example.

She condemned jailed Jewish dissidents in the Soviet Union as “Zionist fascists and opponents of socialism” who should “be kept in prison.” These dissidents were trapped in the world’s largest prison system, the Gulag, in which tens of millions of people perished during imprisonment or forced labor. Davis had no problem with the Gulag at all.

Yet Davis called for abolishing prisons in America, where prisons are used to incarcerate murderers and thieves, rather than dissidents. “Abolish prisons, says Angela Davis,” is the title of a glowing portrait of Davis in the Harvard Gazette, an official publication of Harvard University. “In a lecture at the Kennedy School of Government’s ARCO Forum Friday (March 7), activist and intellectual Angela Davis advocated for the abolition of prisons, casting the issue in human rights terms and urging a broader vision of justice,” wrote the Gazette.

But Davis did not care about human rights in communist countries, where human rights could not be permitted to slow the pace of communism and its total transformation of society. Vast numbers of people were incarcerated and killed by the Soviet Union’s communist government in the Gulag, without any criticism from Davis. The Los Angeles Times described the vast suffering in the Gulag camps in just a single region of Siberia, where 3 million people died.

Scattered throughout the mountains and glacier-sculptured river valleys in the Soviet Union’s northeastern corner, from the Sea of Okhotsk to the Arctic Ocean, are the ruins of more than 100 Gulag camps in which an estimated 3 million men, women and children were executed or died.

At Vostochny, one of the Soviet doctors traveling with the American visitors recalled that the camp was “one of the deadliest of the infamous Gulag camps of the Kolyma River area described by Solzhenitsyn.”

To some Soviet citizens, the names Magadan and Kolyma have the same ring as the names Buchenwald or Dachau to a Jew.

“Kolyma in eastern Siberia was the largest camp area in the U.S.S.R., had the highest death rate. Whole camps perished to a man,” wrote Alexander Solzhenitsyn in his novel, “The Gulag Archipelago.” “Prisoners worked at 75 degrees below zero, in six-foot snow, beneath it only permafrost. One bowl of gruel a day. Kolyma camps were known for executions and mass graves.”

At one Kolyma camp, Solzhenitsyn wrote, “the prisoners were so famished they ate the corpse of a horse lying dead for more than a week in summer, which not only stank, but was covered with flies and maggots. They ate a half-barrel of lubrication grease brought there to grease the wheelbarrows . . ..

“Thousands were sent here for petty theft, for making jokes about Stalin, for unbelievable inconsequential reasons as ‘enemies of the people,’ ” said Yuri Pavlov, 57, a columnist for the newspaper Magadanskay Pravda. “All Soviet citizens who had been captured by the Germans during World War II and later freed were believed to have been tainted by their Fascist captors, and were re-arrested on arrival home and sent here and to other parts of Siberia.

“Americans liberated many Soviets from German prison camps,” Pavlov said. “When they (the ex-POWS) returned home at war’s end, they were sent to the Gulag in Siberia because Stalin thought they were all spies because the Americas saved them. It was crazy.”

Today, as it periodically does, the ACLU of Virginia touted the sayings of Angela Davis. “‘Prisons do not disappear social problems, they disappear human beings.’ — Angela Davis,” wrote the ACLU today on Twitter.

But Davis did think prisons solved some things she viewed as social problems, such as dissent against communist repression by religious minorities. Angela Davis thought prison was appropriate for religious and political dissidents. That’s why she condemned jailed Jewish dissidents in the Soviet Union as “Zionist fascists and opponents of socialism” who should “be kept in prison.’”

A Jewish Harvard law professor noted “that he appealed to Davis, with her very close relationship with the USSR, to intercede on behalf of imprisoned Soviet Jewry activists…. ‘Several days later, I received a call back from Ms. Davis’ secretary informing me that Davis had looked into the people on my list and none were political prisoners. “They are all Zionist fascists and opponents of socialism.” Davis would urge that they be kept in prison where they belonged.’”

After criticizing legislation supported by prison abolitionists — such as bills to reinstate parole in Virginia, and Virginia’s failed second-look bill, which would have allowed murderers serving sentences longer than 10 or 15 years to seek release — I received a couple messages telling me I should be in prison, from prison abolitionists. When I was a young lawyer at the Center for Individual Rights, I was contacted for legal help by the head of a group called Citizens for Law and Order. He had drawn the wrath of a left-wing radio host who was a prison abolitionist — and believed that the head of Citizens for Law and Order deserved to be in prison, threatening to sue him for libel.

As the National Review notes, Davis’s support for human rights abuses is well-known:

Davis is an unrepentant champion of domestic terrorists and murderers. In the early 1970s, Davis famously bought two of the guns used in a 1970 Marin County courtroom kidnapping-shootout perpetrated by Black Panthers, in which a superior court judge and three hostages were murdered. After being charged with “aggravated kidnapping and first-degree murder,” Davis went into hiding. Even after the FBI caught up to her, and even after evidence showed that she had been in correspondence with the planners and well aware of their violent disposition, she was acquitted in 1972.

Davis never stopped defending convicted Black Panther murderers, including those who had tortured a teenager to death, and yet she is still treated as celebrity.

2) Davis collaborated with some of the world’s most nefarious regimes. The CIA estimated that at least 5 percent of the entire Soviet Russian propaganda budget in 1971 had been spent on propping up and defending Davis (as opposed to four going to the war in Vietnam). And she reciprocated eagerly and often. Davis first visited the Soviet Union 1972, a year of renewed political repression and forced labor. “Miss Davis Hails Soviet’s policies,” read a New York Times headline from August of that year. “Soviet ideologists raised Miss Davis to the status of virtual folk heroine during her California trial on murder‐conspiracy charges before she was found not guilty earlier this year,” the report noted. Aleksandr Solzhenitsyn singled out Davis out tool of Soviet propagandists in his 1975 “Communism: A Legacy of Terror” speech.

In 1979, Davis would return to Moscow to collect her Lenin Peace Prize, praising “the glorious name” of the mass-murdering founder of the Soviet Union and his “great October Revolution.” On neither trip did she utter a single word of criticism or concern about the largest prison system that mankind had ever created. Only high praise.