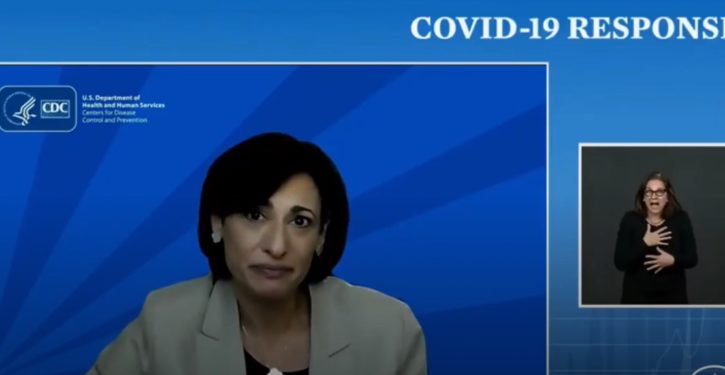 The Centers for Disease Control and Prevention (CDC) revised its data this week to reduce pediatric deaths from COVID-19 by nearly 24%.

On Tuesday, the agency was reporting on its COVID Data Tracker that 1,755 Americans under age 18 had died from the virus since the pandemic began in spring 2020. Now, it is reporting 1,341 deaths in that category.

** Correction with updated numbers. The CDC may have removed closer to 70k deaths. Difficult to tell exacts as prior data has been removed. pic.twitter.com/zqoH1Wa1q4

The CDC said the number was revised March 15 due to a “coding logic error,” according to a footnote on the agency’s COVID Data Tracker. Pediatric death counts were not the only ones to be lowered — total deaths were reduced by roughly 70,000.

“An adjustment was made to COVID Data Tracker’s mortality data on March 14 involving the removal of 72,277 — including 416 pediatric deaths — deaths previously reported across 26 states because CDC’s algorithm was accidentally counting deaths that were not COVID-19-related,” Jasmine Reed, a spokesperson for the CDC, told the Washington Examiner. “Working with near real-time data in an emergency is critical to guide decision-making, but may also mean we often have incomplete information when data are first reported.”

According to the CDC’s weekly provisional data, only 921 children have died for reasons “involving COVID-19,” an even lower number than the official data tracker now presents. The provisional data reported by the CDC typically lags by some period of time. (RELATED: Top WHO Doctor Says Healthy Kids, Teens Shouldn’t Get Boosted Against COVID-19, Contradicting CDC)

Far fewer children have died during the pandemic than any other age group. Children under age five are the only group of Americans still ineligible for vaccination against the virus, but children make up less than 0.1% percent of total COVID-19 deaths, according to CDC data. The mortality rate for minors, even those who are unvaccinated, remains lower than for vaccinated older adults.

The CDC has encountered other issues with data reporting before. The agency was criticized in February after The New York Times reported that a large portion of the data being collected by the agency regarding COVID-19 was not being made available to the public. Earlier this year, Dr. Anthony Fauci admitted that hospitalization data for kids could also be misleading, as many of the children hospitalized with COVID-19 were there for reasons other than the virus.