The Supreme Court’s decision rejecting the Occupational Safety and Health Administration’s emergency vax-or-test mandate showed that a majority of the Supreme Court is skeptical of broad, unprecedented assertions of agency authority. Although the Court could have chosen to invalidate the OSHA rule on more narrow statutory grounds, the brief per curiam swept more broadly. The Court did not fully eviscerate OSHA’s ability to reduce the workplace risks of Covid-19 (loud claims to the contrary notwithstanding), but it did adopt a relatively narrow view of an agency’s delegated authority, curtailing OSHA’s ability to address Covid-19 on the margin, and suggesting broader shifts within administrative law may be on the way.

Insofar as the Court’s decision rested on a “major questions” rationale — the idea that broad agency authority must be expressly authorized by Congress — it would seem to spell bad news for the EPA in the greenhouse gas regulation case to be heard next month. If a majority of the Court concluded that OSHA could not impose a vax-or-test requirement on all large employers as an emergency occupational health standard, it is unlikely to conclude that the EPA’s authority to control emissions from power plants allows it to mandate broader changes within energy systems. Indeed, the major questions doctrine (as applied by the current Court) seems tailor made for West Virginia v. EPA. But NFIB v. OSHA may have even broader consequences for future regulatory efforts to control greenhouse gases.

Both the oral argument and per curiam opinion in NFIB v. OSHA suggested that at least some justices (and the Chief Justice in particular) were concerned that the Biden Administration was using OSHA”s authority over workplace safety as a means of pursuing the broader (and worthwhile) public health goal of increasing Covid-19 vaccinations. In effect, as Michael Dorf hypothesized, the Court was concerned about “pretext.”… Lacking any clear statutory authority to impose a nationwide Covid-19 vaccination requirement, the Biden Administration sought to use the OSHA rule as part of (what the President described as) “a new plan to require more Americans to be vaccinated.”… the Court was clearly concerned that the OSHA ETS was not driven by a concern with occupational safety, as such, but a broader imperative to increase vaccination… the “mismatch” between the OSHA rule and the risk posed by Covid-19 in the workplace — which was based upon the number of people on a company’s payroll, and not any relevant attributes of governed workplaces — reinforced that conclusion….

What does this have to do with climate change regulation? If the message of NFIB v. OSHA is that courts should be sure that agencies are exercising the powers given by Congress for the purposes Congress gave them, then not only is the Court likely to conclude that the EPA’s authority to use section 111 to reduce greenhouse gas emissions from the power sector is limited. It is also likely to be suspicious of EPA efforts to repurpose other pre-existing authorities [such as statutory authority to promote cleaner air] to regulate air pollution to achieve GHG reductions…

Rising border crossings result in new record in December — by 100,000
Next Post
Cartoon of the Day: Red Standards 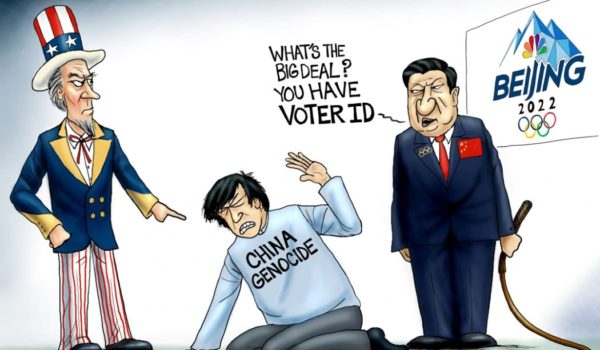