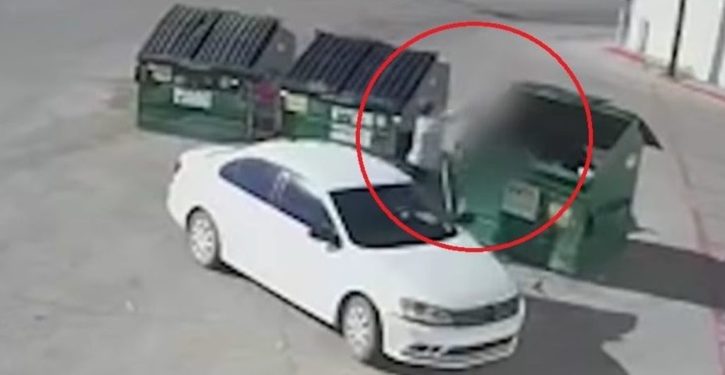 Video surveillance caught a New Mexico teenage mother putting her unwanted infant into a dumpster outside of a store, where the girl stayed for 5 hours before being rescued, according to KOAT.

Alexis Avila, the 18-year-old mother from Hobbs, New Mexico, admitted to placing the infant into the dumpster after Rig Outfitters security footage captured the crime, according to KOAT. She is now facing several charges, including attempted murder and child abuse, Hobbs Police Department said.

The child was reportedly saved after spending over 5 hours in the dumpster outside Rig Outfitters. Video shows rescuers digging through the trash after they heard crying coming from inside, before finding the infant and alerting the police.

The newborn was first taken by ambulance to a local hospital, police said. The infant was then transferred to another hospital in Lubbock, Texas, where she is in stable condition. (RELATED: Baby Found Abandoned In Cardboard Box With Note From Parent, Authorities Say)

“I want this baby to know it is loved,” said Rig Outfitters owner Joe Imbriale, who is starting a GoFundMe for the abandoned baby, according to KOAT. “That just because your mom did that does not mean you are not loved. People care about you. People care about what you feel and think.”

Avila is expected to go to Lea County District Court for her arraignment Monday. Police announced they would hold a press conference with more information the same day.