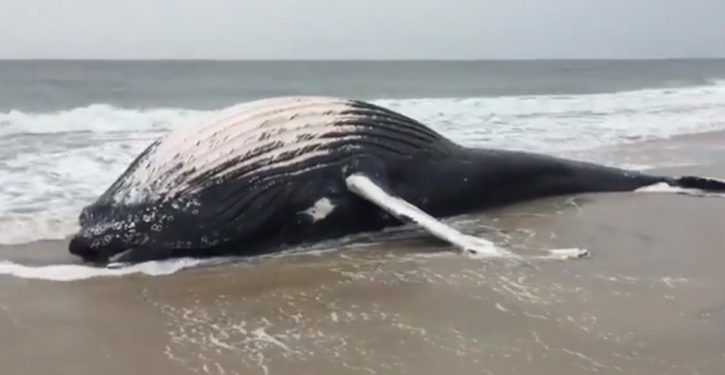 A common left-wing claim for things like the Green New Deal is that capitalism consumes more resources with each passing year, so that only more social control of the economy can keep resources from running out. For example, the Degrowth web site claims that “decoupling economic growth” from “material” consumption is an impossible “illusion” under capitalism, and society should move in the direction of “the provisioning of decommodified services by the government for all households.”

But in reality, the opposite is true: As wealthy nations grow, they use fewer resources year after year, even as their economy and population grow. In America, use of aluminum, nickel, copper, steel, gold, fertilizer, water, crop acreage, stone, cement, sand, timber and paper are all declining. When aluminum cans were introduced in 1959 they weighed 85 grams. Their weight fell to 21 grams by 1972, and to 13 grams by 2011, notes McAfee.

That’s because in capitalist countries like the U.S., industry has a strong profit motive to slim its use of expensive natural resources to the extent possible. Thus, the typical Green argument that economic growth always hurts the environment is mistaken. Dire predictions from earlier generations that we would run out of resources have consistently proven wrong.

As Forbes notes, “As we get richer, we are using resources more efficiently, using less energy, causing less pollution and cleaning up the pollution of the past. We are even re-foresting the earth and protecting other species.” Fewer farms produced more food. Between 1950 and 2015, US milk production rose from 117 billion pounds to 209 billion, while the herd shrank from 22 million cows to 9 million. That means productivity rose 330 percent. “Fertilizer use is down almost 25 percent from its 1999 peak, and by 2014 total water used for irrigation had decreased by more than 22 percent from its maximum in 1984. Total cropland has also fallen, to levels rivaling the lowest points of the previous century,” notes Reason Magazine. Meanwhile, “Parks and other protected areas made up only 4 percent of global land area in 1985, but by 2015, this figure had almost quadrupled, to 15.4 percent,” notes Andrew McAfee in “More from Less.”

By contrast, socialism is bad for the environment. Socialist countries usually harm the environment more than capitalist ones do. Under socialism, Russia slaughtered much of the world’s whales, at least 180,000 of them. It killed far more indiscriminately than other whaling nations, and unlike them, it largely wasted the whales it killed, leaving their carcasses to rot.

It has been called the most senseless environmental crime of the 20th Century. The Russians destroyed whole humpback whale populations — secretly, in violation of a treaty that Russia’s socialist government had signed during the Soviet Union:

“It was one of the fastest decimations of an animal population in world history—and it had happened almost entirely in secret. The Soviet Union was a party to … a 1946 treaty that limited countries to a set quota of whales each year. By … 1986, the Soviets had reported killing a total of 2,710 humpback whales in the Southern Hemisphere. In fact, the country’s fleets had killed nearly 18 times that many, along with thousands of unreported whales of other species. It had been an elaborate and audacious deception: Soviet captains had disguised ships, tampered with scientific data, and misled international authorities for decades.”

All this killing was economically a waste. It was killing for killing’s sake:

“Unlike Norway and Japan, the other major whaling nations of the era, the Soviet Union had little real demand for whale products. Once the blubber was cut away for conversion into oil, the rest of the animal, as often as not, was left in the sea to rot or was thrown into a furnace and reduced to bone meal—a low-value material used for agricultural fertilizer.”

Why did Russia kill so many whales and then waste their flesh? Central planning required whalers to kill the numbers of whales set by bureaucrats, regardless of whether Russia actually had any use for most parts of the whales killed:

“Whaling, like every other industry in the Soviet Union, was governed by the dictates of the State Planning Committee of the Council of Ministers, a government organ tasked with meting out production targets. In the grand calculus of the country’s planned economy, whaling was considered a satellite of the fishing industry. This meant that the progress of the whaling fleets was measured by the same metric as the fishing fleets: gross product, principally the sheer mass of whales killed.

“Whaling fleets that met or exceeded targets were rewarded handsomely, their triumphs celebrated in the Soviet press and the crews given large bonuses. But failure to meet targets came with harsh consequences. Captains would be demoted and crew members fired.”

These production targets had nothing to do with whether whale meat actually was of any use to Russia’s consumers or industries, as Alfred Berzin, a Soviet-era fisheries scientist, explained:

Government ownership of other industries, like agriculture, also has had negative effects on the environment. A classic example is in Soviet Central Asia, where the vast Aral Sea largely disappeared, leaving behind a vast ecologically-ruined wasteland, after a massive cotton project by the socialist government ravaged the regional environment. As the London Daily Mail noted, “The shrunken sea has ruined the once-robust fishing economy and left fishing trawlers stranded in sandy wastelands, leaning over as if they dropped from the air. The sea’s evaporation has left layers of  highly salted sand, which winds can carry as far away as Scandinavia and Japan,  and which plague local people with health troubles.”

By contrast, environmental scientists have discovered that capitalism’s incentives to minimize resource costs are good for the environment:

Environmental scientist Jesse Ausubel remembers the moment his research trajectory changed. Over dinner one night in 1987, his friend and colleague Robert Herman, a physicist with a wide range of interests, wondered aloud, “Are buildings getting lighter?” That apparently simple question inspired the pair to begin looking into the “material intensity” of the modern world.

In 2015, Ausubel published an essay titled “The Return of Nature: How Technology Liberates the Environment.” He had found substantial evidence not only that Americans were consuming fewer resources per capita but also that they were consuming less in total of some of the most important building blocks of an economy: things such as steel, copper, fertilizer, timber, and paper. Total annual U.S. consumption of all of these had been increasing rapidly prior to 1970. But since then, consumption had reached a peak and then declined.

This was unexpected, to put it mildly. “The reversal in use of some of the materials so surprised me that [a few colleagues] and I undertook a detailed study of the use of 100 commodities in the United States from 1900 to 2010,” Ausubel wrote. “We found that 36 have peaked in absolute use…Another 53 commodities have peaked relative to the size of the economy, though not yet absolutely. Most of them now seem poised to fall.”

Marijuana Farms Are Springing Up In One Red State: ‘Smells Like Weed All The Damn Time’
Next Post
26 states to increase minimum wage in 2022