Economist Veronique de Rugy writes in a syndicated column that President Biden’s signature legislation, the Build Back Better Act, “will have a negative impact on the labor supply and send high prices soaring even higher”:

President Joe Biden has united the American people—in disapproving of his performance, with 70 percent of Americans disliking the direction the economy is going and over 6 in 10 blaming him for it. The impact of inflation on people’s pocketbooks and concerns over the expanding role of government are important in explaining those low approval numbers….A recent Washington Post-ABC poll asked, “How concerned are you, if at all, that Biden will do too much to increase the size and role of government in U.S. society?” Some 59 percent said they were “very” or “somewhat” concerned, while 38 percent said they were “not so” or “not at all” concerned…Today’s Democrats are ambitiously pushing the envelope by further enabling the federal takeover of child care, paid leave, energy, and more….this strategy isn’t working so well today. The recent surge in inflation prevents people from getting as much from the cash they received after the passage of $1.9 trillion in COVID-19 pandemic relief legislation. But whether this inflation is the product of our oversized COVID-19 fiscal response, the Federal Reserve’s 36 percent increase in the money supply between February 2020 and September 2021, pandemic-related supply-chain bottlenecks, or a mix of the three, it doesn’t matter politically when people are hammered with higher prices at the grocery store and at the pump and their rent is going up, especially if their wages aren’t keeping up.

It also doesn’t help that experts have been wrong about inflation. First, they claimed there would be no inflation. Then, when inflation inevitably came, they said it would be short-lived or transitory. When it persisted, the alleged reason was that prices were catching up to their pre-pandemic levels. Once experts finally admitted that some of the administration’s policies may have fueled some of the demand for durable goods and withdrawal of workers from the labor force, which in turn exacerbated the supply-chain issues, we were told either that there was nothing that could be done or that the resulting inflation was the price we must pay for a strong labor market….Ideally, supply-side reforms to lift housing and infrastructure building restrictions and occupational licensing requirements should be implemented. It starts with not throwing more fuel on the fire with the “Build Back Better” (BBB) plan pushed by the Democrats….BBB also will certainly have a negative impact on the labor supply thanks to its many disincentives to work and other regulations. That means high prices in these subsidized industries. Meanwhile, we shouldn’t count on spending to stimulate the economy as unemployment is nearing pre-pandemic lows and the economy is already growing. According to the Wharton School’s analysis, we should count on the BBB plan’s real cost to be $4.26 trillion with $1.56 trillion deficit financed, not $1.75 trillion and paying for itself, once all budget gimmicks are taken under consideration. By continuing with this legislation, Democrats are signaling that they would rather stoke the inflation flame so they can centralize more federal power even if they risk a painful intervention by the Federal Reserve.

Build Back Better encourages out-of-wedlock births, by conditioning thousands of dollars worth of tax credits for low-income people on them not getting married. As CNBC explains, many low-income people could lose their earned-income tax credits if they marry: “a childless worker marrying someone with a kid may eliminate the benefit. It may also reduce what their spouse with a child would have received if they were single.” The Republican Study Committee notes that the bill “penalizes marriage: The bill would permanently double the [earned income tax credit]’s marriage penalty on childless worker benefits.”

Build Back Better discriminates against religious enterprises. It specifically states that “eligible child care providers may not use funds for buildings or facilities that are used primarily for sectarian instruction or religious worship.”

The Faucian Fear Machine Is In Full Spin Over ‘Omicron’ Variant, But What Do We Know For Sure?
Next Post
Cartoon of the Day: Lord of the Sand-Flies 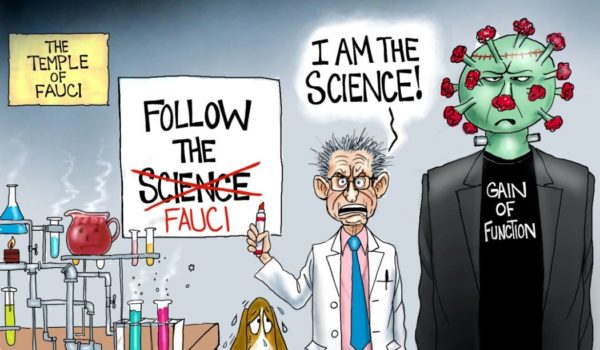