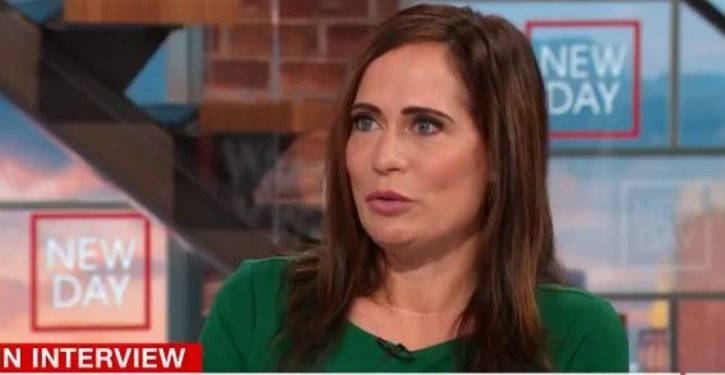 Two CNN reporters failed to ask Former White House press secretary Stephanie Grisham why the public should trust her new book after she admitted Tuesday to lying in the past.

Grisham said while on CNN’s “New Day” she always wanted to host a press briefing during her time at the White House, but knew she would have to lie and therefore couldn’t bring herself to do it. Host John Berman then mentioned Grisham did several interviews with Fox News and asked whether she was “always truthful there?”

“I probably wasn’t,” Grisham responded. “And I regret that so much.”

Grisham said one example was a statement she released about former White House Chief of Staff John Kelly after former President Donald Trump was upset over comments Kelly made. (RELATED: ‘The Fake News Media Machine Against President Trump’: Steve Scalise Pushes Back On Claim Melania Didn’t Visit His Family)

“I worked with John Kelly, and he was totally unequipped to handle the genius of our great president,” Grisham said in October of 2019.

Reflecting on the statement, Grisham told CNN the statement was dictated to her by Trump and that she doesn’t “speak that way.”

Grisham said releasing the statement is one of her “biggest regrets” and that she issued an apology to both Kelly and his wife in her new book.

Neither Berman nor Brianna Keilar questioned why the public should trust her new book, “I’ll Take Your Questions Now,” after she admitted to lying on several occasions.

Grisham also admitted in an ABC News interview that she lied to the public during her time in the White House.

“You are talking about this cultural culture of casual dishonesty at the White House, so you were, as press secretary, even if you weren’t getting briefings, enabling that culture, weren’t you?” George Stephanopoulos asked, according to ABC News.

“Yes, I was,” Grisham reportedly said. “And I’ve reflected on that and I regret that. Especially now when watching him, and so many people, push the false election narrative. I now want to, in whatever way I can, educate the public about the behaviors within the White House because it does look like he’s going to try to run in 2024.”

Grisham, who resigned following the Jan. 6 riot, alleged, among other things, in her new book that Trump was controlling and described his temper as “terrifying.”