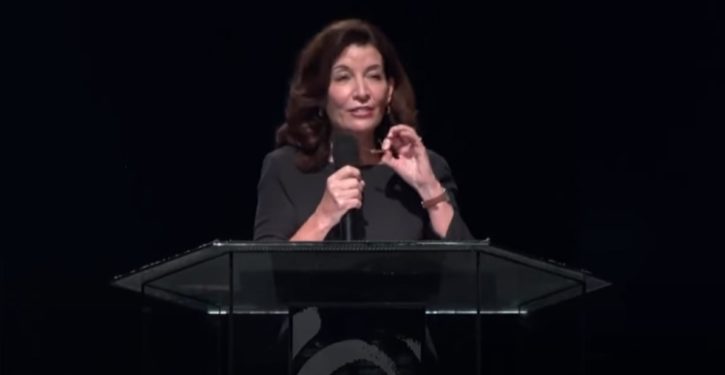 NY Gov. Kathy Hochul holds up her “Vaxed” necklace in apparent show of thanks to God for her vaccinated status. Woke Preacher Clips video, YouTube

New York’s new, default governor, Kathy Hochul, has ordered the firing of all of the state’s unvaccinated health workers at midnight on 27 September.

About 16% of New York’s health workers are reportedly unvaccinated, amounting to “thousands” of workers who will be terminated and not eligible to continue working on Tuesday.

This is thought by many observers to be counterproductive and indeed illogical, in that it reduces health care capacity during a pandemic.

Hochul also announced she is prepared to call up the National Guard to help fill in for the fired health care workers.

New York State Governor Kathy Hochul said all healthcare workers in the state must be vaccinated by midnight and emphasized she was ready to order the National Guard to fill in for any shortfall in staffing https://t.co/fCFhFDMNMY pic.twitter.com/OGG5sSQYH4

She is likely to find that at least some of the Guard’s health care professionals are unvaccinated.  The Guard may find itself having to discharge rather than deploy soldiers who don’t want to receive a vaccine.  The military vaccine mandate for COVID-19 covers Guard members, but vaccine requirements often await call-up orders.  The actual conflict for Guard soldiers might not occur for some time, in the absence of orders.

Some number of Guard members, of course, are also the same people being fired from civilian jobs this week.

The emphasis on vaccine mandates, and the enforcement measures, are increasingly out of proportion to the science of vaccination and the expectations it should raise.

With the bizarrely heated emphasis provoking public distrust, it can’t help the vaccine-mandate cause for Governor Hochul to be seen in a video from 26 September addressing an audience at the Christian Cultural Center in Brooklyn, asking people to be “apostles” for the COVID-19 vaccines and to reflect that they need to “go out and talk about it and say, we owe this to each other.  We love each other.  Jesus taught us to love one another, and how do you show that love but to care about each other, enough to say, please get the vaccine, because I love you and I want you to live, I want our kids to be safe when they’re in schools, I want to be safe when you go to a doctor’s office or to a hospital and are treated by somebody … you don’t want to get the virus from them.”

NEW – NY Governor Hochul proclaims, "The vaccine comes from God" and asks those present in the megachurch congregation, "I need you to be my apostles."pic.twitter.com/naPWVWX0nk

According to Hochul, God “made the smartest men and women, the scientists, the doctors, the researchers, He made them come up with a vaccine.  That is from God to us, and we must say, thank you, God. Thank you.”

She continued:  “And I wear my ‘vaccinated’ necklace all the time to say I’m vaccinated.”

I have sympathy for this view, in light of Hochul’s remarks made in a Christian context.  If someone wears a “Jesus” necklace, she’s proclaiming that she venerates and worships Jesus.  Is Hochul proclaiming that she venerates and worships a vaccine?  Decorating oneself with vaccination totems is certainly not a way to communicate that vaccination is a scientific solution.

It’s more likely to be taken as a sign that the wearer is kind of a nut.  The existence of such totems looks like the jewelry industry taking advantage of a fad – or even, given the pervasiveness of COVID-virus-oriented marketing, like collusion of some kind among government, media, and other industries to exploit all avenues of cultural suasion and profit.

Totally not a cult, though.

These people are not well.

The best analogy would be with Hollywood’s well-known penchant for merchandise spinoffs as part of the profit calculations for movie franchises.  We aren’t at the stage of marketing COVID Happy Meals or cleverly decorated SARS Burgers, as far as I know, but having “Vaxed” necklaces out there evokes the costume jewelry sales that have gone with, say, Titanic and the Lord of the Rings movies.

The difference, of course, being that the movies in question, with their charming jewelry tie-ins, are supposed to be romantic, gripping, delightful stories.  A vaccine is not, from any sane point of view, a factor in such a cultural treat.

One more reflection on this head before moving on.  Some dozen or so years ago, or perhaps more, I recall seeing a made-for-TV movie about a catastrophic eruption at Yellowstone and the scientists and government bureaucrats who worked the crisis.  (I’ll try to locate and identify it, but not tonight.)

I was especially struck by a theme in the movie that focused on mantra-like public advisories.  The one I remember was a “Walk to Life” advisory campaign intended to get people to walk away from the disaster.  There was little discussion in the movie of giving people information.  The mindset was more about just telling them what to do, in simplistic ways like urging them to “Walk to Life.”

“Get vaccinated” comes across as such a campaign:  a simplistic public order issued instead of information.

Such mental connections are inevitable in light of Governor Hochul’s additional reflections on Sunday.  “All of you, yes, I know you’re vaccinated,” she assured the audience.  “You’re the smart ones, but you know there’s people out there who aren’t listening to God and what God wants.  You know who they are.”

The media would never tolerate such invocations of religious compulsion from a Republican.  Nor should they.  Hochul can’t get away with it either, even though the media will cover for her.  The people don’t need a guide to this egregious demagoguery.  They recognize it immediately as illegitimate.

This kind of full-frontal violation of the Western peoples’ expectations about government’s proper limits is the key catalyst behind mass public demonstrations against vaccine mandates and “passports.”

Little effort is made by mandate-focused governments to offer rigorously reasoned justification.  Simplistic orders are issued, instead of information.

Hochul is quite obviously using God’s name to advance an unconstitutional mandate, sow division, and incite judgment against others – and doing this not from a pulpit or even a pundit’s perch, but as the governor of New York.  The point is not even that she’s wrong in her premises and conclusions.  It’s that she’s doing it at all.

Addendum as this goes to post:  Hochul is now speaking for the religions of New Yorkers, proclaiming that “There are not legitimate religious exemptions because the leaders of all the organized religions have said there’s no legitimate reason.”

NY Gov. Kathy Hochul: “There are not legitimate religious exemptions because the leaders of all the organized religions have said there's no legitimate reason." pic.twitter.com/UPp7Lc9tDY

I suppose there’s a certain consistency in Hochul using her interpretation of religious edicts as the basis for her public policy stances. 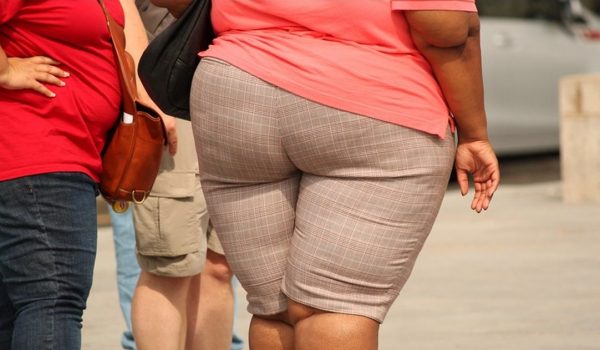 Government spends millions to make Americans fatter, less fit
Next Post
Quote of the Day: ‘No great country can say it’s secure without being able to control its borders’