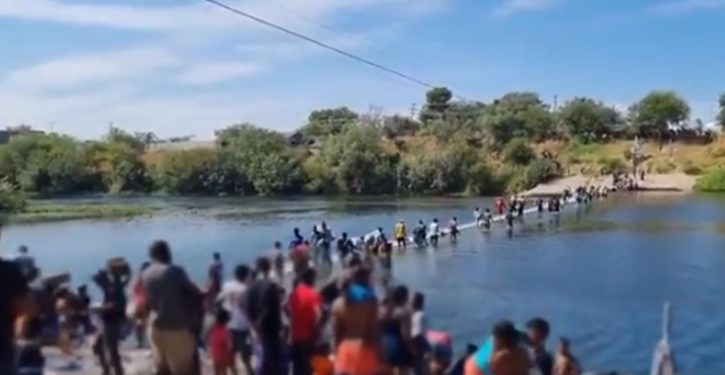 Since March 2020, the U.S. has invoked a Title 42 law that provides for excluding illegal migrants, regardless of their country of origin, from entry into the U.S.  A judge’s ruling has now put that policy in peril.

The Wall Street Journal recounts:  “At the time [March 2020], Trump administration officials said a public-health law known as Title 42 gave the government the authority to turn back to Mexico any migrant caught crossing the border illegally, regardless of their country of origin, to stop the spread of Covid-19.”

The effect of the law is that the U.S. doesn’t have to take in migrants from other countries (i.e., those not from Mexico) and then process them for deportation.  Ordinarily, the U.S. can turn Mexicans over to Mexico at the border, but if an agreed policy like “Remain in Mexico” is not in place, third-country nationals illegally crossing the border can’t be handed over to Mexico.

The number is quite real.  Since March 2020, according to statistics cited by WSJ, “about 1.1 million people have been turned back to Mexico [under Title 42], including roughly 118,000 people traveling as families.”

The federal jurist issuing the new order this week is Judge Emmet Sullivan, who famously dragged out judicial processing of Michael Flynn for months after the Justice Department filed to drop the charge against him.

Sullivan has stayed his order for 14 days to allow the Biden administration to appeal.

At PJ Media, Rick Moran makes this salient point:  “The immediate effect of Sullivan’s ruling will be dire. Families that show up at the border will not be turned away. Instead, they will be processed and released as they await their court hearing — possibly as long as five years away.”

Moran warns, “It doesn’t seem to bother the ACLU that the government does not have the facilities to house and care for the tens of thousands of families who will now make a mad dash for the border.”

And he’s right.  A change like this in enforcement will be a fast-traveling signal likely to trigger tens of thousands more foreigners to rush America’s southern border.  The impact could be to as much as double the already overwhelming problem massive migration is posing for U.S. enforcement and resources.

But the first thing Americans themselves are bound to notice, if the Title 42 exception is terminated, is that foreign, illegal migrants are allowed to enter and disappear into the United States, regardless of their COVID-19 status, while Americans are losing their jobs and access to public facilities because of policies about COVID-19 status.

President Biden, remember, issued a vaccine mandate this month that will affect the jobs of some 80-100 million Americans.

The contrast could not be more stark.  If Judge Sullivan’s ruling stands, it will be obvious that none of this is about public health.  U.S. law, as enforced by the Biden administration, sees a pandemic only through a political lens, and is ready to restrict U.S. citizens to the point of denying them access to a key basic of life – a job.  The pure politics of it is clarified when at the same time, the federal government would be officially, formally turning a blind eye to migrants, most of whom will never show up for further adjudication once they’ve been passed through a hasty initial processing.

DOOCY: Vaccination "is a requirement for people at a business with more than 100 people, but it's not a requirement for migrants at the border. Why?"@PressSec says "that's correct" without offering ANY explanation as to why. pic.twitter.com/XgJeKirfII

The migrants are not being held in quarantine.  They’re being sent all over the country, regardless, again, of COVID-19 status.  There’s no explaining away the obvious political intent here.  If Sullivan’s order isn’t fought by the Biden administration, and goes into effect, we can expect them to show up in American communities in at least the same number they’ve been turned away since March 2020; i.e., over a million in 18 months.

You can’t have it both ways.  If the pandemic should mean clamping down on the movements of people through society, then it must include a public health exclusion for illegal migrants at the border.

If it doesn’t justify such a rational exclusion, it’s obvious the pandemic is no valid excuse for any mass restrictions or mandates the U.S. government wants to impose.  The people are right to reject the imposition on them of blatantly cynical and inconsistent orders claiming to have “public health” in view.