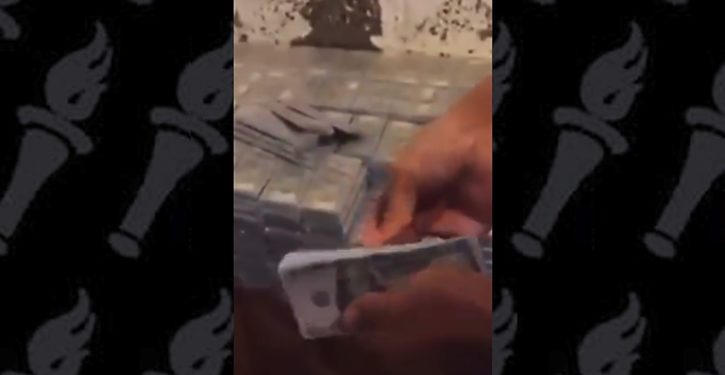 No, no:  this isn’t about the Biden administration having deliberately dispatched a pallet of cash to the Taliban, as the Obama administration did to Iran (several times) in 2016.

But it’s an interesting recurrence of a theme.  This time, the visual is even more vivid, as it involves the hands of a presumed Taliban operative rifling through a sealed package of U.S. $100 bills, after plucking it from a vast, neatly-stacked pallet-size lot of such packages and ripping it open.  (The cash interlude starts around the 30-second mark.)

This gets worse and worse pic.twitter.com/Qqm5bHJjlA

The video includes earlier footage of Taliban surveying an array of neatly laid-out small arms.  What we’re seeing is what the U.S. left behind in the evacuation.  It’s not clear where the U.S. cash bonanza came from, but it could have been a few different sources, including the Afghan national bank and the U.S. embassy.

The issue is not that it’s a big scandal to leave currency behind.  The priorities for an evacuation have to have human lives at the top.

The issue is that with a big influx of cash, the Taliban have some walking-around money we didn’t have to pony up for them.  It doesn’t matter that the bills are probably traceable to a particular stash of cash.  We have little hope of learning anything from a Taliban cash spending spree, other than that the Taliban sure enough had a field day with the Benjamins.  Launder the bills through a couple of transactions in the global back alley, and it won’t be apparent what the Taliban initially bought with them when they eventually circle back home to Mom.

It might well have been silly to airlift a pallet of cash out of Afghanistan, even on one of the half-full flights reportedly taking off from Kabul at the outset of the evacuation.

But it really does matter that cash was left to feed the Taliban’s bloodthirsty habits.  It’s our money, in this case meaning that our authorities decide if it lives or dies.  Just incinerate it if there’s no sensible prospect of removing it from the Taliban’s grasp.

Given the Taliban’s penchant for trolling America, it’s especially likely that they will spend the cash on some method of either attacking the U.S., presenting us with crisis problems, or just embarrassing us.  (Or, of course, some combination of the three.)  The mere embarrassment scenario, unfortunately, is the least likely of these options.

James Woods, the actor with a big Twitter following, expressed severe annoyance that we left the Taliban a going-away present of such magnitude while homeless veterans subsist in squalor on our own streets.

Go to the thirty second mark, and then remember that homeless veterans are living on the sidewalks of our cities.

Woods is right about the moral failure here.  That said, the practical impact of funding the Taliban while they remain an enthusiastic partner of Al Qaeda, and gain control of Afghanistan again, is the main thing that just can’t be written off.