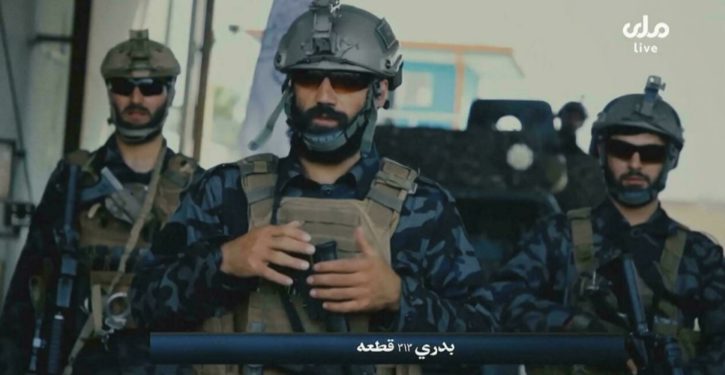 The photographic memories of Joe Biden’s misadventure in Afghanistan are beginning to mount. Among the images that will likely haunt him and the Democrats well into the foreseeable future is the one of a throng of Afghans clinging tenuously to the passenger bridge of a U.S. aircraft at the airport in Kabul, which was about to taxi away from the gate. A correspondent with the BBC described it as “one of the saddest images I’ve seen from #Afghanistan. A people who are desperate and abandoned. No aid agencies, no UN, no government. Nothing.”

And who could forget the picture of the determined Afghan who perished after stowing away in the wheel well of a U.S. Air Force cargo plane? The image, which is too gruesome to share, shows a lifeless human body, its limbs flailing aimlessly in the frigid air.

Now a new candidate for the Biden Family Scrapbook has emerged. This one is meant more to taunt than to haunt. It shows members of the Taliban in full beard sporting “special forces” gear that the U.S. government left behind along with billions of dollars of high-tech equipment in its haste to bug out.

Agence France Presse notes that the terrorist group has posted numerous pictures and videos on social media “for propaganda purposes to underline how the Taliban have better equipped and trained men at their disposal than in the past”:

Rather than a battered Russian-designed Kalashnikov rifle slung over their shoulder, the men of Badri 313 hold new US-made rifles such as the M4, sometimes with night-vision goggles and advanced gunsights.

If the Badri battalion is looking for a new catchier name to go with their western-militarized look, maybe they should consider calling themselves the Biden Brigade.

Civil Rights Commission sued for violating Freedom of Information Act
Next Post
Mr. Snide is back, this time over question about stranding Americans in Afghanistan