Back in her days as a State Department spokesmodel, Marie Harf proposed on MSNBC that the way to soothe the savage beast that was Islamic terrorists was to give them jobs. “The fact that there’s no governance and there’s no opportunity for young people,” said Harf, “lets groups like ISIL grow there and flourish” in places like Libya.

Harf took a real razzing from members of the media, especially those on the Right, which she reacted to by claiming her revolutionary idea “might be too nuanced for some.”

While Harf’s “jobs for jihadists program” never took off, a far-left activist group in the UK that calls itself the Stop the War Coalition is advocating something similar.

The Daily Mail reports that the group is urging “the British government to pay reparations to the Taliban in order to “advance the rights of the Afghan people.”

How the funds would get from the Taliban to the people whose rights the terrorist group has long been abridging the group doesn’t answer. Since the ill-fated U.S. troop withdrawal, human rights abuses by the Taliban have mushroomed. Via Fox News:

Even as Afghanistan’s resurgent Taliban pledged to respect “women’s rights” in a propaganda blitz Tuesday, fighters from the group shot and killed a woman in Takhar province after she went out in public without a burqa.

Earlier Tuesday, an Afghan and former State Department contractor told Fox News that Taliban fighters had set up checkpoints throughout Kabul, in some cases beating civilians trying to get to the airport and escape the country.

In a related incident, the Taliban opened fire in protesters in Jalalabad. Their crime? Waving an Afghan flag.

BREAKING: Taliban opens fire on protesters in Jalalabad because they were reportedly waiving the Afghan flag. pic.twitter.com/Hasmv3XjDU

The hasty U.S. troop pullout has indeed created a humanitarian crisis in Afghanistan. How — if — it will be resolved remains to be seen, though bribing the Taliban to assume a kindler, gentler aspect doesn’t seem realistic. 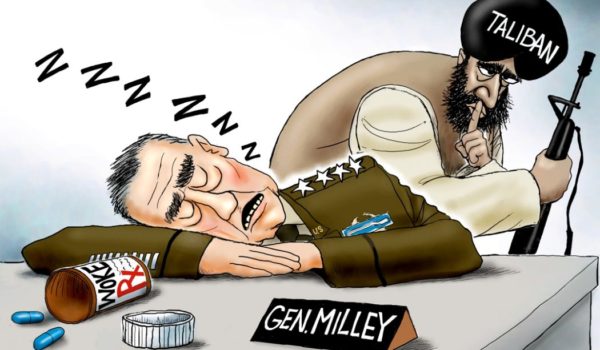 Cartoon of the Day: General Oblivious
Next Post
Twitter enlists users to flag ‘misleading’ tweets as part of misinformation crackdown