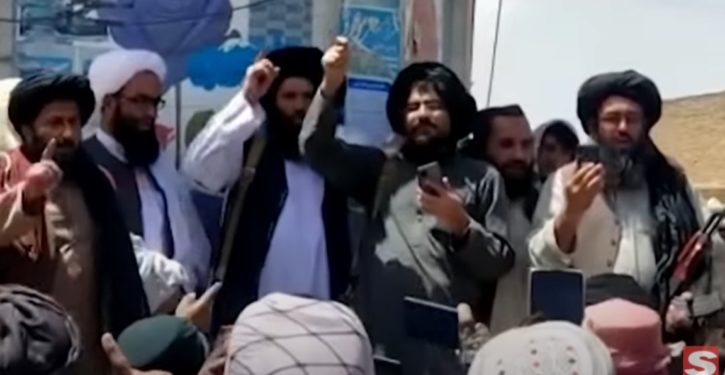 Updates at bottom. Update III is a doozy.

Cue the Verdi choruses.  It’s getting real in Afghanistan.  News services reported a few hours ago that personnel from the U.S. embassy in Kabul are being relocated while they await decisions about the embassy’s immediate future.  There are about 1,400 personnel said to still be with the embassy, although it’s not clear if all of those are American officials.

That type of move typically precedes a decision to evacuate, and it now appears, as posted in the last hour as this is being written, that we’re deploying additional troops to Kabul to conduct what’s called a non-combatant evacuation operation, or NEO.

#BREAKING: US to send troops to Kabul airport to pull out embassy staff: State Dept pic.twitter.com/CZHfeFVIud

There are currently 650 U.S. military personnel at Kabul airport and the embassy for security (embassy security is provided by the Marines).

The Pentagon says three infantry battalions will be deployed to Kabul, with a total of 3,000 additional troops to be sent in:

#UPDATE "The first movement will consist of three infantry battalions that are currently in the Central Command area of responsibility. They will move to the Hamid Karzai International Airport in Kabul within the next 24 to 48 hours," said Pentagon spokesman John Kirby pic.twitter.com/WWtqkppSFx

I haven’t seen a statement of the force sourcing, but three battalions would probably include at least one from the Army.  Depending on task organization, the three battalions could account for at least a third of the troops.

Deploying Marines would likely include a detachment from the 24 MEU, currently embarked in the USS Iwo Jima (LHD-7) ARG in the theater.  The Marines and Army both maintain rapid response forces in CENTCOM, however.

No tactical air assets have been mentioned; if there is to be helicopter air support for security, or movement of embassy personnel inside Afghanistan by helo, access through Pakistan, including landing zones, will be needed for the deploying helos.  It’s possible that won’t be feasible for much longer as a secure transit option, especially once the American exodus is underway.  Fixed-wing air cover for certain tasks can be provided with strike-fighters from USS Ronald Reagan‘s (CVN-76) air wing through Pakistani air space, with aerial refueling.

The Air Force will presumably plus-up its footprint as well, with the newly announced plan to commence military flights out of Kabul to evacuate Afghan allies.

According to Reuters, the UK is eyeing the same moves: relocating embassy staff and preparing for military-run evacuation.

OK, and that now appears confirmed: the UK is deploying a force of 600 to conduct an evacuation.

Staff at British Embassy in Kabul have been slashed to core team.

Afghans are reportedly fleeing areas all over the country where the Taliban have surged in to fight village to village and regain control of the provinces.  An unconfirmed report on social media on Thursday indicated “Kandahar has fallen,” with video suggesting the Afghan national army is fleeing.

Aren’t y’all glad we spent billions over there and lost are sons and daughter for absolutely nothing? pic.twitter.com/UzXXQk0Euv

A map published on Thursday shows how much of Afghanistan the Taliban have put in contention in recent weeks.

Recent key gains include Herat, and the provincial capital of Ghazni less than 100 miles southwest of Kabul on Thursday.

But if the Afghan army is in fact fleeing Kandahar, such a signal retreat will probably accelerate the national army’s retreat in more lightly-defended provinces on the other points of the compass.

One reason we are likely acting so quickly right now is that our ability to move via ground transportation within Afghanistan or through the corridor into Pakistan appears to be all but gone.  Basically, Fortress Kabul is rapidly losing secure communication with the territory outside of it.

Social media updates from around Afghanistan indicate the Taliban are moving into villages and executing men, demanding younger men join them, threatening those younger men’s families, and rounding up young women and girls to “force into marriage”; i.e., rape and abuse.  The low-cutoff age for this is said to be 12.  I saw an estimate this week that Afghan refugees fleeing on foot and seeking asylum are likely to total some 1-3 million.

As mentioned by Reuters, the official estimates are that the Afghan government in Kabul could fall to the Taliban in 90 days, but the worst case is that it could fall in as little as 30.  It’s a good bet it could fall in less.  The Biden administration settled on 31 August 2021 as the formal end-of-mission date for military engagement, but that’s 19 days from now, and we’re already afraid we can’t protect our staff at the embassy in Kabul until they can be flown out of the country.

Naturally, tweeps are posting old images of the desperate helicopter evacuation of Saigon in 1975.

Update:  Additional information on troop plus-ups.  A brigade combat team will deploy to Kuwait from Fort Bragg to be on standby for Afghan contingencies  That’s in addition to the troops already slated to deploy immediately into Afghanistan.

NEW: Pentagon moving 3,000 infantry troops to Kabul airport to help evacuate @USEmbassyKabul; 1,000 add'l troops Qatar to get SIVs out; & an infantry brigade combat team (3,500 soldiers) from Fort Bragg will move to Kuwait within a week to be on-call for Afghanistan, if needed.

Click through for the thread.  Apparently the Pentagon does intend to put additional aircraft in Afghanistan.

“SIVs” are Special Immigrant Visa-holding Afghans (Afghan allies).  Apparently the troops to support their air departure (presumably Air Force) will be deployed from the existing USAF contingent in Qatar.  That’s how I read it, but the reference may be to moving the Afghans through Qatar.

It appears the on-ground footprint in Afghanistan will go from 650 to a minimum of 3,650.  Depending on what the “1,000 troops Qatar” means, could be another thousand.  The 3,500 BCT from Fort Bragg backfills theater reserve in Kuwait.

Update II:  If the New York Times is correct, it looks like the infantry deploying to Afghanistan is all Marines.

The Pentagon is moving 3,000 Marines to Afghanistan and 4,000 troops to the region to evacuate most of the Embassy and U.S. citizens in Kabul, as the Biden administration braces for a possible collapse of the Afghan government within the next month. https://t.co/ascvVf014b

Happily, we have engaged in some polite diplomacy with the Taliban now.

U.S. Asks Taliban to Spare Its Embassy in Coming Fight for Kabul https://t.co/tvcjqR3QSa

Wouldn’t want to fail to check the Smart Power box.

Update III:  Mystery solved regarding the SIV processing in Qatar?

SIV applicants are NOT among those being evacuated from Afghanistan alongside US civilian personnel from the embassy.

~1000 personnel are being moved to Qatar to speed up the PROCESSING of SIV applications, but the US won't lift a finger to relocate anyone. pic.twitter.com/jTA3h9HIkd

It appears the somewhat garbled reporting earlier was to paper over the Pentagon briefing point that the 1,000 personnel deploying to Qatar are to process visa applications for the Afghans, but spox John Kirby would not commit on whether we are actually evacuating the Afghan allies (interpreters, etc.).  This would paint a scenario in which the embassy brings bags of SIV applications to Qatar and a bunch of applications get processed, but there’s no clarity on what happens to the, you know, living, breathing Afghans.

We can hope there’s more to it than this, but it hasn’t been clarified yet that I’ve seen.