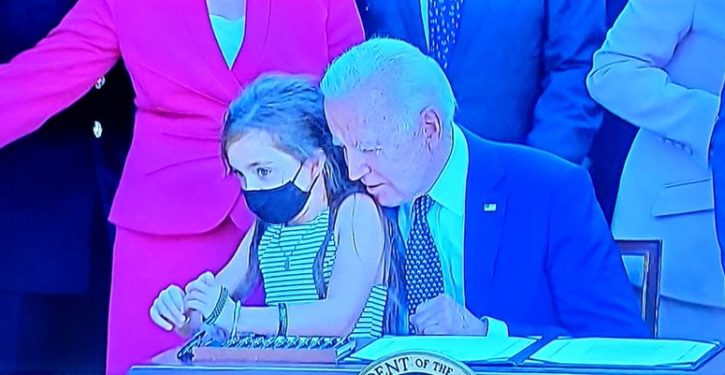 As calls for Andrew Cuomo to step down grow in intensity, some commentators are recalling that the nation’s fearless leader suffers from a malady similar to the governor’s. That is, Joe Biden, too, has been accused of sexual harassment by multiple women — and in some cases worse (think Tara Reade).

But far and away the creepiest manifestation of Joe Biden’s handsy-ness is his — shall we call it “fascination?” — with children. He gave the nation a fresh dose of it during a Memorial Day tribute when he deviated from his prepared remarks (you could easily picture his handlers slapping their foreheads offstage) to compliment a little girl in the audience for her — er — “maturity.” Watch:

Joe Biden looks at a little girl in the audience, the daughter of a veteran, and says "I love those barrettes in your hair. Man I’ll tell you what, look at her she looks like she's 19 years old sitting there like a little lady with her legs crossed." pic.twitter.com/DbH8ihG2Mj

On Thursday, he was at it again. The occasion this time was a Rose Garden event to honor the Capitol Police and D.C. Metropolitan Police for their heroism during the “insurrection” at the Capitol on Jan. 6.

But whereas in the previous incident Biden limited his lechery to words, yesterday’s incident was totally “hands-on.” Nick Arama of RedState provides a blow-by-blow:

Biden was signing the recognition honoring the officers when he starts staring at someone. It becomes clear it’s a little girl after he motions her to come over to him and pulls her into his lap. He leaned over to her, whispering, and putting his nose in her hair. She seems uncomfortable and moves away from him.

Biden spots a little girl out of the crowd, calls her over to sit on his lap, then tries to sniff her pic.twitter.com/0W0K4lADFL

Readers may recall that then-former Vice President Biden said in a video message in April of 2019 that he would “be more mindful about respecting personal space in the future.”

Readers may also recall that shortly after that mea culpa, Biden brought a young child up onstage at a campaign event in Washington, announcing, “He gave me permission to touch him, all right?… Everyone knows I like kids better than people.” 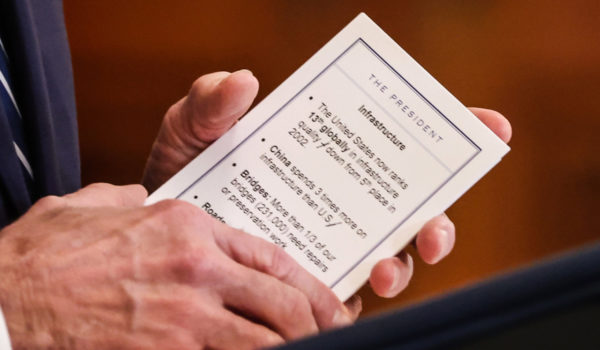