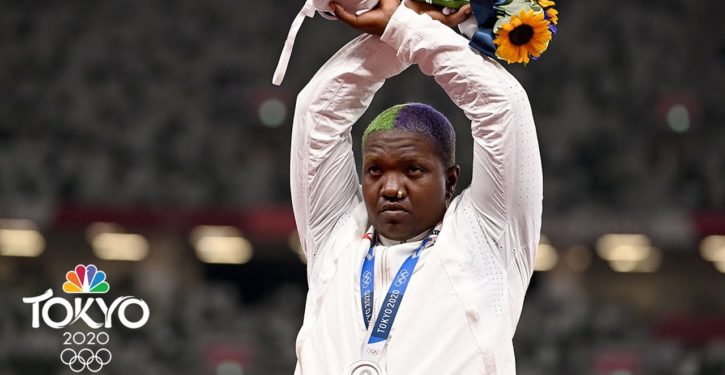 Her name is Raven Saunders, and after winning a silver metal last Saturday in the women’s shot put, she defied the International Olympic Committee (IOC) ban on political protests by crossing her arms diagonally above her head to form an X. The gesture, explained Sanders whose hair is green one side, purple on other, was intended to symbolize the “intersection of where all people who are oppressed meet.”

Saunders’s perceived personal oppression stems from the fact of her being openly lesbian and black. She also suffers from chronic depression. (RELATED: Olympic hammer thrower visibly angry she had to endure national anthem at Olympic trials)

Perhaps Saunders would benefit from meeting one of the oppressed fellow Olympians with whom she feels solidarity. A good candidate would be Belarusian sprinter Kristina Timanovskaya, who announced on Sunday that she had been instructed by her government to “pack her belongings as a decision had been made for her to return to Minsk.”

In a video released on social media, Timanovskaya beseeched the IOC to intervene on her behalf, noting:

I am afraid that I might be jailed in Belarus. I am not afraid of being fired or kicked out of the national team. I’m concerned about my safety. And I think that at the moment it is not safe for me in Belarus. I didn’t do anything, but they deprived me of the right to participate in the 200 meter race and wanted to send me home.

Anatol Kotau, of the Belarus Sports Solidarity Foundation, a group that represents Belarusian athletes repressed by Belarusian authorities, told CNN that at the Tokyo airport Timanovskaya approached a Japanese police officer and told him she would like to apply for political asylum.

The story has a happy (make that “less sad”) ending. On Monday, Timanovskaya received a humanitarian visa from Poland, whose deputy minister for foreign affairs wrote on Twitter, “Poland will do whatever is necessary to help her to continue her sporting career.”

Raven Saunders in contrast harbors no fear of being jailed on her return to the U.S. On the contrary, she will likely receive a hero’s welcome at the airport. And unless I miss my guess, she will probably be invited to the White House, along with her fellow victorious Olympians, to pose for pictures with the president.

Would she benefit from walking a mile in Kristina Timanovskaya shoes? On second thought, I doubt it.