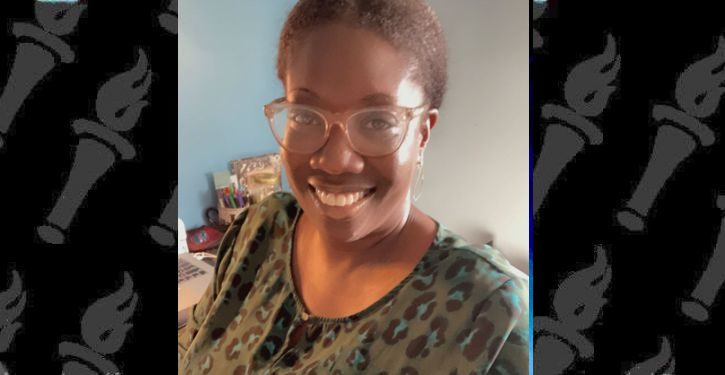 Her name is Michelle Leete, and she is not only vice president of the Fairfax County, Va. chapter of the NAACP but a leader in the Virginia state PTA. Both are unarguably positions of responsibility, which Leete, in a speech outside of a middle school where anti-critical race theory demonstrators had congregated, showed herself to be unfit to hold.

It’s a little hard to make our her words in the video that follows, so here is a transcript of her remarks:

Fox News quotes Brenton Hammond, a candidate for state delegate in Virginia who spoke at the same event, as having written on Twitter “I heard this tonight as it was spoken and I was in shock. Absolutely unacceptable, we must be a better example for young people and all people.”

So how did the school board react? They declined a request for a comment, claiming that it is not their policy “to comment on the remarks made by an individual outside our organization.”

The local NAACP chapter Leete works for also punted when asked for s statement. The Virginia PTA, of which Leete is a leading member responded that they are “aware of news reports about a disturbing choice of words used by a board member during a public event,” adding that “words have power and it is important to understand the impact of our language.”

Democrats’ new M.O.: Accuse GOP of saying or doing something the Dems have been accused of
Next Post
L.A. County bringing back indoor mask mandate regardless of vaccination status