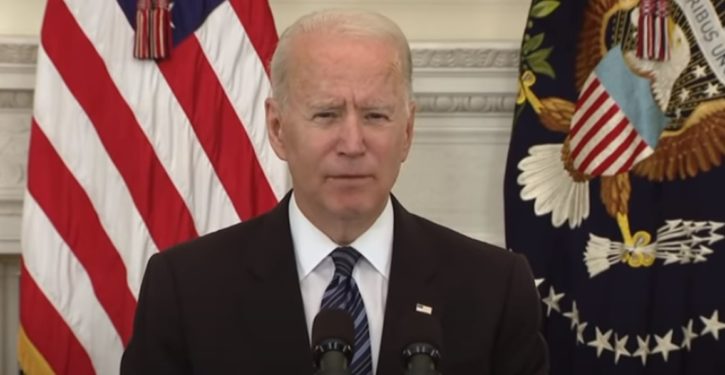 This is a weird pattern that crops up now and then with Democrats.  In an address on Wednesday, President Joe Biden swiped at the armed-citizen principle by implying – apparently – that being armed with rifles, pistols, and shotguns doesn’t enable the people to effectively oppose the government.

To effectively oppose the government, Biden suggested, the people would need nuclear weapons and F-15s.

BIDEN: "Those who say the blood of Patriots, you know, and all the stuff about how we’re gonna have to move against the government.”

"If you think you need to have weapons to take on the government, you need F-15s and maybe some nuclear weapons."pic.twitter.com/WVHUffpphP

The extreme vagueness of everything except the terms “F-15s” and “nuclear weapons” has allowed all commentators on this silly speech to cast it according to their own interpretations.  Some heard in it a reference to insurrection, and the impossibility of effective insurrection if the insurrectionists don’t have the weapons of long-range military combat.  (Biden could have added that if, by some bizarre working of cosmic torsion, federal troops were fighting citizens in pitched military battle, the private citizens would first need fully automatic small arms — weapons of war — which the federal troops have but the citizens don’t.)

The claim that an insurrection can’t be successful, or even a real threat, without F-15s and nukes might come as a surprise to those who’ve been insisting that the unarmed incursion into the U.S. Capitol on 6 January 2021 was an insurrection, and the most dangerous thing to happen in America since the Civil War.

Perhaps Biden’s garbled reference to the Thomas Jefferson quote about the tree of liberty being refreshed by the blood of patriots gave some color to the “insurrection” theme.

Aside from a specific focus on insurrection, others have keyed on Biden’s statement that the Second Amendment always limited who could own firearms.  It didn’t, actually; it justified firearms ownership as a right – not a privilege – and was intended, in part, to prevent exactly what Biden proposes to do: deny firearms to the people for arbitrary reasons.

But viewing the proposition Biden’s way makes the reality that private citizens don’t own F-15s and nukes sort of analogous to Biden appointing himself to deny classes of ordinary small arms to private citizens as well.

Sort of; aside from the manifold ways in which these situations are not analogous.  (Try deer-hunting with a B61 nuclear bomb, or defending your home against criminals with an F-15.  Or, of course, maintaining either of these armaments in ready working order on a household budget.)

We’ve had this whole tedious debate before, back when Eric “Nuke ‘Em till They Glow” Swalwell was threatening the American people with nukes if they took it into their heads to oppose the confiscation of firearms.  I wrote a longer post on the topic at the time, and won’t reiterate its points.

The gist of it was that an armed citizenry, vis-à-vis government, isn’t about the people preparing for pitched battles.  It’s about deterring government overreach.  The real analogy is not to fighting for control of the country with combat weapons; it’s to making your home or auto or your precious self too hard a target to be steamrolled easily.  A government that knows it will have to fight to subdue the people is less likely to engage in casual tyranny.

The idea is not that the people arm up and try to look menacing over every policy difference factions of the people have with each other.  It’s that government observes an agreed set of boundaries because the people have the power of resistance if the government gets out of hand.

Recognizing that governments can and do get out of hand, indeed that they invariably tend to, has been an “all things equal” assumption of American governance since the proposition was enunciated in the Declaration of Independence in 1776.  It’s why the Framers came up with a government that was intended to be kept limited, federal, and constitutional through the checks and balances of separated powers.

All things are no longer equal in our national government, however.  Through the regulatory overreach of more than a century of progressivism, the government in Washington, D.C. has become accustomed to exercising what amounts to tyranny on an ever-increasing slate of matters – starting, for example, with electronic surveillance of the population and the ability to hold citizens endlessly at risk even when they have broken no laws.  But the concerns don’t by any means end there.

A substantial segment of the people is reaching a tipping point of refusing to endure this form of rule any longer.  It’s a freighted time.  Babbling about F-15s and nukes as tools for interacting with the American people is exactly the wrong way – the most confrontational, heavy-handed, tyrannical way – for the president to frame a policy on gun restrictions and confiscation.

But then, there’s no right way to frame a policy on gun restrictions and confiscation.  Governments want to restrict and confiscate guns because doing so disarms the law-abiding.  It makes the law-abiding more vulnerable, to both tyranny and crime.  It does nothing to limit or deter criminals.  Criminals can have their uses, in fact, for an overreaching state.

Discuss amongst yourselves.  A final thought:  as laid out in that earlier post on Swalwell, using nukes on Americans would be an act of almighty stupidity for the federal government in Washington, D.C., which is located east of practically all of the territory of the United States.  No sane government contemplates using nukes on its own people – and if the capital is a big target for the prevailing winds pattern and the movement of air masses over the earth, an insane government, using nukes, must have something very different in mind from expeditious restoration of the status quo.

BREAKING: Kamala Harris to visit the border this week
Next Post
NATO exercise Sea Breeze, in the Black Sea, not a breeze so far 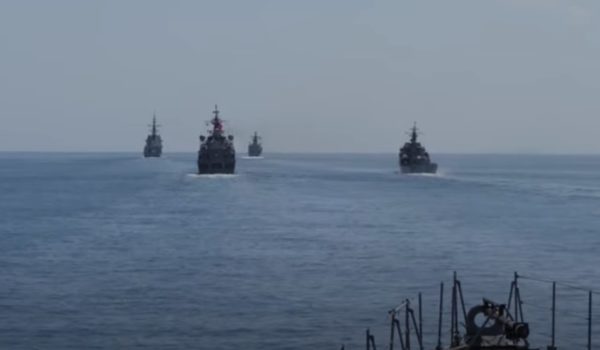