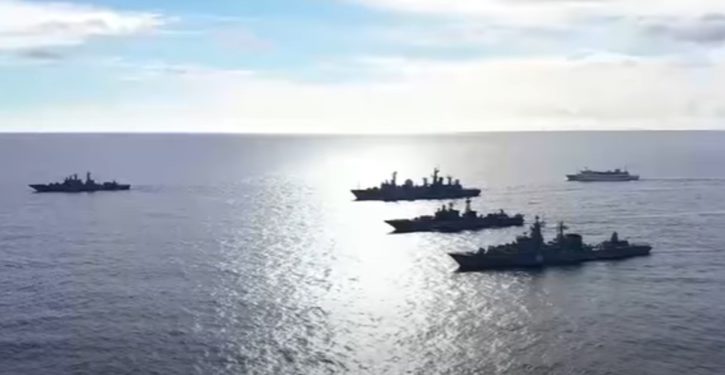 While the U.S. media are transfixed by a phantom Iranian “flotilla” (yes, we’ll get to that in a separate article), something at least as interesting, and perhaps more so, is happening in the Pacific.

A Russian navy task force is conducting the largest and farthest-flung exercise in its history in the Central Pacific Ocean.  The admiral in command of the task force, Rear Admiral Konstantin Kabantsov, acknowledged as much in a statement quoted by Krasnaya Zvezda (“Red Star”), the flagship of the Russian military’s public communications service (emphasis added):

“The main task of the exercise is to work out the actions of tactical groups, headquarters, and command and control bodies in the course of preparing and performing tasks as intended,” said Rear Admiral Konstantin Kabantsov, commander of the Primorsky flotilla of diverse forces of the Pacific Fleet. – And the uniqueness of the exercise is that it is conducted in the central part of the Pacific Ocean – this was not the case not only in the recent history of our fleet, but also in the history of the Russian fleet as a whole.

How Centrally Pacific is the current expedition?  According to the Russians, about 4,000 kilometers (close to 2,200 nautical miles) east of the fleet’s homeport of Vladivostok.  That distance puts the task force right around Hawaii.  (Note that if they’re not telling the truth, the U.S. knows that as we speak – as do Japan, South Korea, and Australia, for that matter – even if we’re not countering their claims in public.  It does no good for the Russians to lie about something like this.)

Anyone who knows Russian/former-Soviet naval operations over the past 50-60 years knows that this is, in fact, unprecedented.  Russian warships have transited the Pacific a number of times in the last three decades for port visits in the U.S., and until the Ukraine invasion in 2014 participated in the vast “Rim of the Pacific” (RIMPAC) exercises held every other year near Hawaii with dozens of warships from Pacific Rim navies.

But even in the Soviet Union’s heyday, the Soviet Pacific Fleet didn’t conduct its own blue-water exercises as far out as the Central Pacific.

Prior to World War II, the Soviet navy’s Pacific contingent was small and largely derelict.  (It remains small compared to the Northern Fleet, and has been managed as an ill-funded afterthought for most of its history.)

Indeed, other than the Russia-Japan War in the first decade of the 20th century, the last really interesting thing the Russian navy did in the Pacific was send a squadron to operate off the West coast of North America for seven months in 1863, in the middle of the U.S. Civil War.

The story of that outing, which was simultaneous with a Russian squadron deploying to the U.S. East Coast, makes fascinating reading.  I commend the account at the link to you, and won’t rehash it here, except to say that the main purpose of the deployments was thought to be impressing the naval powers of Europe with Russia’s ability to span the oceans and put European interests at risk.*

Thus, in analyzing an emerging series of Soviet-era exercises in 1978, a Naval Postgraduate School professor noted (PDF p. 7) that the “father of the Soviet Navy,” Admiral Sergei Gorshkov, had alluded to the 1863 deployments in a discussion of the first exercise in the series, which occurred in 1970.  Gorshkov’s comments were published in 1972, in the Soviet/Russian navy’s professional journal Morskoy Sbornik (“Maritime Roundtable,” in loose translation).

The modern-era exercises (with iterations at that point in 1970 and 1975, held under the name Okean, or “Ocean”) didn’t venture nearly as far asea as the expeditions of 1863.

But Professor Donald Daniel speculated that “Such statements [as Gorshkov’s] lead one to wonder if the anti-SLOC [sea lines of communication] activities of OKEAN ’75 might not have been intended just as much to make an impression on Western leaders in peacetime as they were to practice a wartime task.”

Seems like a good call.  Certainly the Russian announcement of the current exercise in the Pacific appears to have such impression-making in mind.  The formal announcements have emphasized that the task force – which we should not overhype, as it is composed of three older capital warships, led by Slava-class cruiser Varyag (011), and three newer Steregushchiy-class corvettes – is one that brings varied capabilities for defending sea and air space.  The task force can hunt submarines and surface ships as well as defend air space in conjunction with counter-air jet fighters based ashore.  (The fighters in question, MiG-31s, obviously require in-air refueling to operate very far out in the Pacific.)

The Russian notices point out that the U.S. Navy is conducting a short-notice submarine-surge exercise called Agile Dagger 21 off Hawaii.  This pointing out is assuredly pointed, implying that the Russian task force with its antisubmarine capabilities is there to, shall we say, keep our subs under watch.  (A capability that should not, in its turn, be overhyped.  The Russian ships with torpedo tubes could be carrying high-speed “Shkval” torpedoes, but to target a submarine with them they would first have to find it.)

There are a couple of things Russia hasn’t mentioned (there may be more; I’m focusing on these).  One is that the USS Theodore Roosevelt (CVN-71) Carrier Strike Group very recently completed a major exercise in the Northern Pacific, with the U.S. Pacific Air Force and the USS Makin Island (LHD-8)/15th Marine Expeditionary Unit ARG/MEU, on the CSG’s way home from deployment.  Perhaps that context goes unmentioned because the contrast in task force size and capabilities would not be terribly flattering.

But the Russians also don’t mention the up-arming of the Udaloy-class “frigate” Marshal Shaposhnikov (543) with the Kalibr long-range cruise missile during a recent overhaul.  (The U.S./NATO designation of the Udaloy class is “destroyer,” but Russia refers to it as a frigate.)  Marshal Shaposhnikov conducted a successful long-range launch of the Kalibr at a land target in April 2021, and is in the Central Pacific task force.

With the Kalibr 3M-14 variant missile, the ship can hold Hawaii at risk with the Kalibr from as much as 1,350 nautical miles away – something the Russians probably assume they don’t have to spell out for the benefit of their military counterparts in Honolulu.

The task force also includes the Russian navy’s missile range instrumentation ship, Marshal Krylov, used to track the progress of space- and ICBM-range rocket launches.  This could have meaning for both the observation of U.S. activities and support to Russian ones, so just file it for reference.

Back in 2013, Russia sent the interesting, but largely missed, signal that she could approach Guam by air, via a path along which the U.S. had no rapid-reaction interdiction capabilities until after the Russian bombers were in air-launched cruise missile range.  In the geography Russia demonstrated, Guam was at essentially undefended risk.

Nothing has really changed the dynamics of that conundrum in the years since.  Putting Patriot missiles in Guam has come to have increased value as the types of missile threat (including ballistic missiles from China) have expanded.  But over the vast distances involved in the Northwestern Pacific, assets dedicated to defending Guam from the archer – the Russian bombers – rather than relying on interdiction of the arrow – the cruise missiles (with a weapon system imperfectly designed for that role; i.e., the Patriot) – don’t have a whole lot else to do.  It becomes a question of optimal asset usage, whether or when to dedicate them to such a mission.

The challenge is one there has yet to be an ideal solution for.  Russia emphasized the challenge by circling Guam with bombers in December 2014, apparently without drawing a response from U.S. forces, which were out of position to interdict during most of the Russian operation.

Seven years on, the Russians are making another of their impress-the-West demonstrations.  This time, the message is that they’re off Hawaii, and not in order to put on summer dress uniforms and show up for cocktail parties.

Pound for pound of gray hull, the U.S. and our Pacific allies have the advantage, of course.  But geography can be an advantage of its own, and how big any advantage is, including America’s, will depend on things like needing to deal with China and Iran, as well as Russia, with the same pool of military resources.

It is one of Dyer’s Axioms that no nation starts a new military enterprise because it is happy with the status quo.  Russia just started an actual new one, upstaging even the possibility of a Russian submarine presence off the UK during the G7 summit.  Submarines, after all, have been there before.

* Our alert readers will be aware of the passage from de Tocqueville’s Democracy in America (1835) now screaming to be quoted, so here you go (courtesy of the Good Reads website):

There are at the present time two great nations in the world, which started from different points, but seem to tend towards the same end. I allude to the Russians and the Americans. Both of them have grown up unnoticed; and whilst the attention of mankind was directed elsewhere, they have suddenly placed themselves in the front rank among the nations, and the world learned their existence and their greatness at almost the same time.

All other nations seem to have nearly reached their natural limits, and they have only to maintain their power; but these are still in the act of growth. All the others have stopped, or continue to advance with extreme difficulty; these alone are proceeding with ease and celerity along a path to which no limit can be perceived. The American struggles against the obstacles which nature opposes to him; the adversaries of the Russian are men. The former combats the wilderness and savage life; the latter, civilization with all its arms. The conquests of the American are therefore gained with the ploughshare; those of the Russian by the sword. The Anglo-American relies upon personal interest to accomplish his ends, and gives free scope to the unguided strength and common sense of the people; the Russian centres all the authority of society in a single arm. The principal instrument of the former is freedom; of the latter, servitude. Their starting-point is different, and their courses are not the same; yet each of them seems marked out by the will of Heaven to sway the destinies of half the globe.

A perennial favorite during the Cold War, this insight from de Tocqueville continues evergreen, in spite of the recent signs of decline in Russia, and what some see as such incipient signs in the United States.  China, of course, is an essential addition to the mix now, but cannot be analyzed or prophesied over without reference to both Russia and the U.S.  I believe we have touched the necessary stones at this point, but feel free to add ’em if you got ’em. 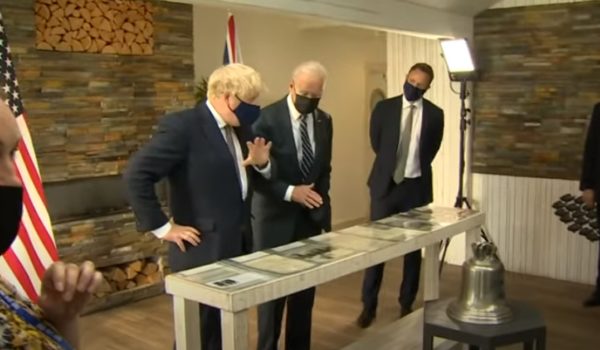