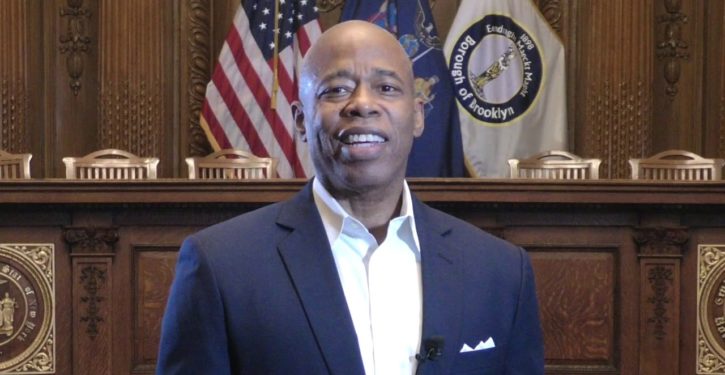 In any other city, a campaign “promise” like this would have ended a candidate’s candidacy. But here in ultra-blue New York City, which elected a lunatic like Bill de Blasio not once, but twice, it is likely to be glossed over as a first-timer’s mistake.

Adams, who is the frontrunner, is the least radical of a currently outsize field of candidates — which frankly isn’t saying much. He has already played the race card against fellow mayoral wannabe Andrew Yang, insisting that Yang’s accusation that he lives in New Jersey is motivated by racism.

But Adams’s unforced error on “the new technology of remote learning,” is not likely to resonate well with New York’s parents of school-age children, who spent the last year watching their offspring languish at home while a disembodied voice on a computer screen provided their only link to the outside world. Watch. (A transcript follows.)

By using the new technology of remote learning, you don’t need children to be in a school building with a number of teachers. It is just the opposite. You could have one great teacher like in one of our specialized high schools to teach 300-400 students who are struggling with math with the skillful way that they are able to teach.