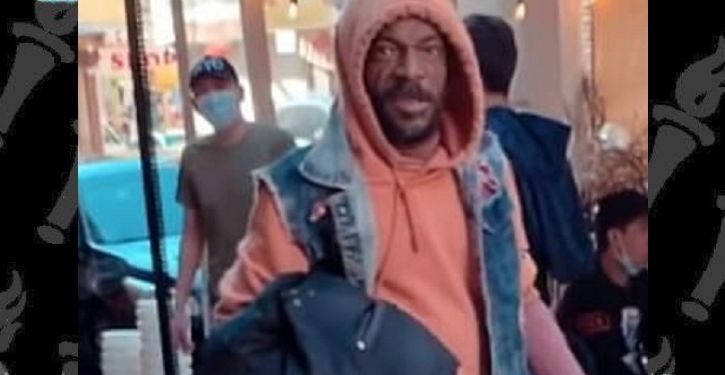 Add to that the fact that the assailant, Alexander Wright, was a beneficiary of New York’s ludicrous bail reform program on multiple occasions, and you really have to wonder who’s running the asylum.

Wright was booked with assault as a hate crime and criminal possession of a controlled substance last Monday after hauling off and belting an Asian woman in the face. A surveillance video that captured the attack shows the victim, age 55, slump to the ground, apparently unconscious. Her injuries required hospitalization.

On Tuesday, NYPD Commissioner Dermot Shea appeared on a local news station where he raged at the bill signed into law by New York Gov. Andrew Cuomo in December 2019 that eliminates the setting of cash bail for most misdemeanors and nonviolent felonies. “What are we doing in society when we are releasing these people right back onto the streets?” Shea asked rhetorically before answering his own question:

It’s putting New Yorkers at risk. We’re arresting somebody for pushing a woman down the stairs and then we release them back into the street? I mean, this is crazy. We need help on some of these laws. We cannot be chasing our tail, catch-and-release, catch-and-release.

One of the first examples of the law’s inadequacies came shortly after its passage when a woman named Tiffany Harris was set free after being arrested in an anti-Semitic assault only to be busted a day later in another alleged attack.

As for Wright, he’s been arrested within the past year on charges including second-degree assault, harassment, and felony criminal mischief. As was the case in the Chinatown incident, nearly all of Wright’s assaults have been targeted at total strangers.

In one of those cases, Wright is accused of punching a 72-year-old man in the face at a bus stop in The Bronx. He also allegedly tossed hot coffee at two traffic agents in Midtown on Jan. 27 — for which he was busted on May 10.

After his capture by police on Monday shortly after the attack, Wright tried to fix blame on the woman, whom he erroneously referred to as “he”:

“He hit me!” the suspect yells in a video of his arrest posted to YouTube, apparently referring to the female victim.

“Nobody hit you!” a woman standing nearby shoots back. “You hit the lady!”

“So how did I get this on me?” counters Wright, as he holds up his wrist to the camera.

In the wake of anti-Semitic assaults, Democrats call out Islamophobia
Next Post
Jan 2020: That’s when disease expert emailed Fauci that part of COVID-19 ‘potentially’ looked engineered