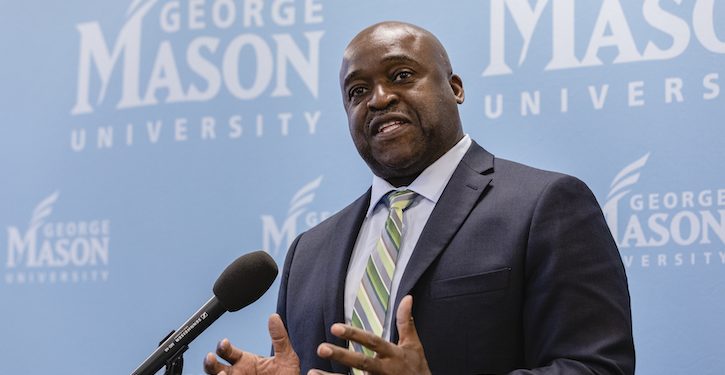 The president of George Mason University wants to give minorities a big advantage in hiring until the faculty is as heavily minority as the school’s student body and the future, mostly non-white U.S. population. This is illegal, say lawyers and law professors. Indeed, GMU’s president, Gregory Washington, recognized that objection in an April 15 email to the university’s faculty, before saying it wouldn’t stop him from giving minorities a preference in hiring. Washington quoted a professor as saying:

I am concerned about what it really means to hire faculty and staff that ‘reflect the student population.’ The university’s job as an R1 institution is to hire the best faculty and administrators, period. The type of target hiring of minorities proposed through ARIE is both prejudicial and illegal. I would like to have this addressed.

In response, GMU’s president wrote, “If you have two candidates who are both ‘above the bar’ in terms of requirements for a position, but one adds to your diversity and the other does not, then why couldn’t that candidate be better, even if that candidate may not have better credentials than the other candidate?  Study after study has proven that the most diverse organizations, which recognize the importance of maintaining a diverse and inclusive environment, are the best performing organizations.”

The first sentence asks the faculty to engage in illegal racial discrimination. The second ignores contrary research, and gets causality backwards.

GMU’s president is misdefining “diversity” to mean huge, unrealistic percentages of racial minorities. George Mason University’s faculty is already diverse, as most observers see it. “The racial diversity of the faculty is above average,” says College Factual.

But it is not “diverse” enough for GMU’s president. He complains that the faculty is not as diverse as the “society” students “will enter” by the mid-21st century, which he says will not have a white majority. He notes that unlike GMU’s faculty, the “majority of our students are non-white and reflective of the nation’s expected ethnic make-up in the mid-21st century.”

The fact that the faculty are not as diverse as the student body is no reason to expand the use of race in faculty hiring. For example, the Supreme Court ruled that a school district could not lay off white teachers based on their race in order to keep black teachers, even though “the percentage of minority teachers was less than the percentage of minority students.”  (Wygant v. Jackson Board of Education (1986)).

“Diversity” does not require that a school be mostly non-white, or anything close to it. Boston has a mostly minority student population, but a court ruled Boston could not use race in admissions to increase the percentage of blacks and Hispanics at a selective school, because colorblind admissions would already yield enough diversity: a student body that was over 15% black and Hispanic. As the Boston-based federal appeals court explained, diversity was already present where “under a strict merit-selection approach, black and Hispanic students together would comprise between 15% and 20% of each entering class, and minorities, in toto, would comprise a substantially greater percentage.” (Wessmann v. Gittens (1998)).

George Mason University’s faculty is diverse under that measure. College Factual says GMU’s faculty is about a quarter non-white (including 7.9% black, 6% Hispanic, and 9.1% Asian), and only 67% non-Hispanic white (some faculty are listed as “other race”).

Institutions can’t hire based on race to make their staff mirror society’s current racial composition, much less its future more heavily non-white racial composition. That would be “outright racial balancing, which is patently unconstitutional,” according to the Supreme Court.

An institution’s workforce need not be as “diverse” as the population it serves. For example, a federal appeals court ruled that a city could not promote blacks based on their race just because the police department was whiter than the city’s population. The city argued that “more African-American supervisors could better supervise African-American officers who in turn were needed to relate to the larger African-American population.” The court rejected that argument, ruling that it was illegal to promote employees based on their race “to give a better reflection of the racial composition of the city,” or “remedy racial imbalances in the police department.” (See Police Association of New Orleans v. City of New Orleans (1996)).

President Washington argues that a “diverse” candidate is simply “better” and thus should be hired over a white candidate; but a federal appeals court rejected that argument when it was made by the City of New Orleans. The City unsuccessfully argued that Blacks can “better supervise” and “relate to” other Blacks. The Supreme Court rejected an argument similar to President Washington’s in its Wygant decision, ruling that black teachers could not be given priority over whites just because they were “role models” for black students.

President Washington also attributes GMU’s limited number of black and Hispanic staff to the effects of “structural racism.” But the fact that GMU’s faculty are whiter than its student body does not show discrimination. The faculty have special qualifications that students do not, and most faculty were hired at a time when applicants were whiter than they are today, due to America’s changing demographics. Comparing the faculty’s racial composition to students’ is an apples-to-oranges comparison, in the eyes of judges. The Supreme Court ruled that discrimination is not shown by comparing the racial breakdown of different components of an institution that have different qualifications. It rejected a discrimination lawsuit against an employer that had an overwhelmingly white skilled workforce, and an overwhelmingly minority unskilled workforce, saying that didn’t show any racial “disparate impact.” (See Wards Cove Packing Co. v. Atonio (1989)).

Virginia’s history of segregation is not a reason to give a preference to minority groups like Hispanics and Asians that were never subjected to segregation the way black people were. Courts have struck down racial set-asides when they included minority groups that hadn’t been victimized the way black people were. (See L. Feriozzi Concrete Co. v. Casino Reinvestment Dev. Auth. (2001)).

Yet under GMU’s “ARIE Task Force Recommendations,” GMU will “recruit, hire, and retain faculty” and “staff to reflect” its “student population,” which includes many Asians and Hispanics. It will fund “diversity cluster hire initiatives” and mandate “search plans” and “diversity of applicant pool[s]” to eliminate “gaps” between “the demographic diversity” of its faculty and its student body.

It doesn’t violate employment discrimination statutes for an employer to give minorities a racial preference to fix what the Supreme Court calls a “manifest racial imbalance” in “traditionally segregated job categories.” (See United Steelworkers v. Weber (1979)).

But GMU does not have such an “imbalance,” as defined by the Supreme Court. True, GMU’s faculty is whiter than its student body, or the unskilled labor force in its region. But that’s irrelevant, and doesn’t mean GMU has a “racial imbalance” in the legal sense. Whether a racial imbalance exists is legally determined by comparing the demographics of GMU’s workforce to the “relevant qualified area labor pool,” which only includes those people “actually qualified for the position.” (See Janowiak v. South Bend (1984)). As the Supreme Court has explained, “the comparison should be with those in the labor force who possess the relevant qualifications.” (See Johnson v. Transportation Agency (1987)).

So if there aren’t many blacks with PhDs, it’s not a “racial imbalance” for GMU not to have lots of black faculty. In more than a dozen academic fields, “not a single black student earned a doctoral degree in 2017,” notes The Atlantic. So the fact that GMU’s faculty is about 8% black is not a sign of discrimination against black people.

GMU, by contrast, already has more minority faculty than most colleges. GMU also has a far more diverse faculty than similar schools in Virginia, like James Madison University, whose faculty is 85% non-Hispanic white.

In addition to the fact that GMU has no “manifest racial imbalance” that would justify using race in hiring or promotions, its faculty positions are not “traditionally segregated job categories” that can be targeted toward minorities.

“Traditionally segregated job categories” are jobs from which minorities have been systematically excluded in the relatively recent past. In its Weber decision, the Supreme Court treated steel craftworkers as a “traditionally segregated” job, “because blacks had long been excluded from craft unions,” including in the prior decade. Similarly, in its Johnson decision, the Supreme Court cited the fact that “women had not traditionally been employed in [the] positions” for which affirmative action was being used. By contrast, minorities have been employed in college faculties for many years, including at GMU. For example, the black economist Walter Williams was a professor at GMU for over 40 years.

The Supreme Court has said that “diversity” is a reason for colleges to consider race in admissions. But the same may not be true in hiring. Under the Constitution, diversity is not a valid reason for using race in hiring, according to a federal appeals court. (See Lutheran Church–Missouri Synod v. FCC (1998)).

GMU’s faculty hiring also must comply with Title VII of the Civil Rights Act. Title VII’s ban on racial discrimination does not appear to contain a “diversity” exception. An appeals court ruled it violated the Title VII for a school to consider teachers’ race in employment decisions in order to achieve “diversity.” (See Taxman v. Board of Education (1996)). 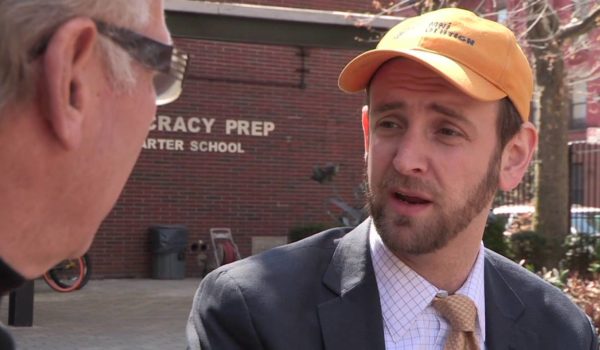