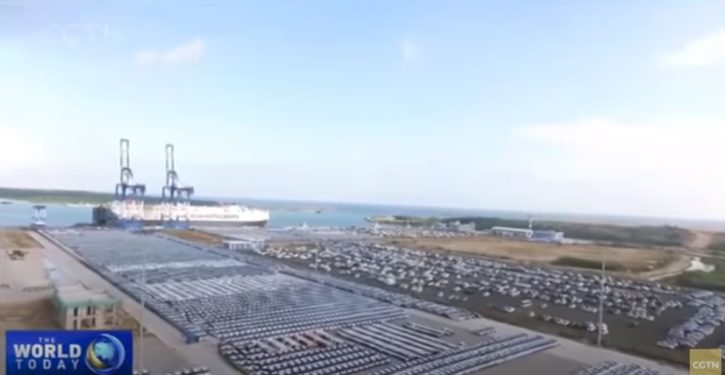 As often happens, global crosswinds can blow through the smallest local dust-ups.  Such may be the case with a cargo ship sailing for Danish shipping line Thorco, which was caught in Sri Lanka this week entering port without declaring a hazardous cargo of uranium hexafluoride gas (or UF6).

The ship, M/V BBC Naples, is flagged by Antigua and Barbuda and is on its way from Rotterdam (the Netherlands) to China.  The report caught my eye because the ship is carrying UF6 from Europe to China, which raises a few questions.

One is whether the UF6 is newly converted from natural uranium prior to enrichment via centrifuge (less likely), or is spent-fuel, uranium “tails” in the form of UF6, which seems more likely and could come from a number of sources.

China’s relationship with natural converted uranium (which, for those who follow the bouncing ball of Iran’s nuclear fuel cycle, is what takes place at Esfahan) is a shadowy and complicated one, something China has been working hard to become self-sufficient in, or at least source from minimally-vulnerable supply lines.

But China is also a major investor in nuclear fuel recycling projects, and it would not be that surprising to see spent fuel UF6 headed to a Chinese port from Northwestern Europe.

There are quite a number of potential sources for such fuel, including stocks from Germany, the UK, France, and locations in Eastern Europe, as well as Japan (which has sent some spent fuel to France for “deconversion”).  There are probably other sources the could feed a shipment made from Europe; this list was compiled in searches sufficient to establish that spent fuel is shipped all over the lot, and stored in quite a few places, if processed for safe deconversion in fewer.

The interest lies in the ship’s failure to declare its UF6 cargo, when it stopped in the Chinese-leased port of Hambantota in Sri Lanka – and in the fact that China and France’s Orano nuclear conglomerate (formerly Areva) have been working an agreement on a joint project in China using recycled fuel.

Whether the UF6 came from a stock held by Orano in France isn’t really an issue.  Orano might arrange to ship UF6 for the Chinese project from other sources, and perhaps did so, given that the UF6 apparently left Europe by ship from Rotterdam rather than from a French port.  (That in turn may have been for convenience, a choice that came with using Thorco, which is a leading shipper of such cargo.)

It does seem odd, however, that the BBC Naples would fail to declare the UF6.  Thorco, the shipping line for which BBC Naples operates, specializes in “project cargo” – unusual, often oversize or special-handling cargo – like UF6, and presumably is well aware of the need to adhere to local laws when transporting it.  The ship made an unscheduled stop in Sri Lanka because of unspecified ship problems, seeming to indicate something to do with propulsion or perhaps the electrical systems.  But declaring the cargo is a no-brainer; it’s not something that would be overlooked in an agitated moment.  (Note that Sri Lanka’s requirement was merely for the ship to move from the inner port to the outer port, once the UF6’s presence had become known.  BBC Naples is apparently still able to obtain services for whatever problem she is suffering.)

So that aspect of the event is curious.  Another is its timing.  If we suppose that the UF6 is on the way to China for a foreign-involved recycled-fuel effort – again, knowing that China and Orano have been negotiating such a project – the most notable recent event in that regard may be a U.S. federal court ruling on a Trump executive order prohibiting U.S. entities from investing in such enterprises.

As background, consider that China’s China National Nuclear Corporation (CNNC) and Orano have been eyeing their recycled-fuel project (for a Chinese nuclear power reactor) for a number of years, and concluded preliminary agreements on it in 2018 and 2019.

In August 2019, the Trump administration “blacklisted” a handful of Chinese nuclear companies, although at that point CNNC was not one of them.  (For completeness, one that was, China General Nuclear Power Corporation, or CGN, is the Chinese nuclear company in which Hunter Biden’s Bohai Harvest RST investment firm bought a token stake in 2014.)

The list was added to in August 2020, with a Defense Department list of Chinese companies with suspicious links to China’s military industries, and this time included a subsidiary of CNNC.

In November 2020, Trump issued Executive Order 13959, which prohibited investment by U.S. entities in the administration’s blacklist.  CNNC is on the list for application of the E.O., which is an extensive one.

The blacklist by the Trump administration would make projects like the China-Orano proposal harder.  Basically, it would put their enterprise out of position to benefit from U.S. investors.  (It could also affect Orano through major, longstanding Orano subsidiaries in the U.S., which date to the Areva days or even earlier.)

The China-Orano project seemed to languish after the designation of a longer list of Chinese companies and the Trump E.O. published in November 2020.  Industry news reporting has in any case not clarified the status of it since some hopeful but cautious statements from the fall of 2020.

One peeved U.S. investor was directly affected by Trump’s move: Bill Gates, whose company TerraPower had been working with China on the development of a “4th generation” reactor using “molten salt” cooling technology.  This joint project involved CNNC and was to employ spent fuel, although it was separate from the China-Orano project.  Under the Trump investment prohibition, Gates had to give the China venture up, something he was not happy about.

The Biden administration, in the meantime, has not moved to rescind E.O. 13959.  What it did do, however, is mount a very weak defense when a Chinese company, smartphone maker Xiaomi, challenged the basis of the E.O. in the U.S. District Court for the District of Columbia.

Xiaomi is one of the Chinese corporations on the Defense Department list.  Objectively, given China’s track record in this regard, every company on the list is highly likely to represent a national security hazard to the United States, and to in fact have any suspicious involvement the DOD claims with the Chinese military.  But for whatever reason, the Biden administration signally failed to impress the court with a justification for Xiaomi’s inclusion.

As summarized at the last link, “During briefing on the matter, DOD produced only a two-page document to the Court in support of the designation; a memorandum which the Court found ‘begins on a shaky ground’ with errors that ‘do not inspire confidence in the fastidiousness of the agency’s decision-making process.’”

From an administration whose policies differ substantially from Trump’s, that obviously looks like policy reversal through heel-dragging and vitiated performance.  But the outcome is what matters.  Xiaomi obtained an injunction from the court suspending application of E.O. 13959 in its (the company’s) case.  The date of the ruling is 12 March 2021.

I haven’t seen reporting about other Chinese companies piling on to seek injunctions for themselves.  But it’s likely some will – and even in cases where they don’t, we may wonder how rigorously the Biden administration plans to enforce the E.O.  More importantly, foreign companies doing business with China will form their own opinions about that.  Their sentiments will probably lead them to risk engaging with China, on the assumption that their activities won’t get them or their U.S. partners in trouble.

Two other interesting aspects of this sequence of events are to be noted.  One is that the judge in the Xiaomi case was our old friend Rudolph Contreras:  Obama appointee in 2012, Peter Strzok’s homeboy “Rudy,” and the FISA court judge who in December 2017 had to be recused from hearing the Michael Flynn case for sentencing.  (Contreras was not one of the judges who approved the Carter Page applications to the FISA court.  But he was a FISA court judge with a personal connection to Strzok, at the very least, and possibly other officials at the Justice Department and FBI who, like Strzok, worked both the Carter Page surveillance and the Flynn operation.)

The other interesting aspect is that following the Xiaomi ruling on 12 March, BBC Naples left Rotterdam with the UF6 headed to China on 17 March 2021. 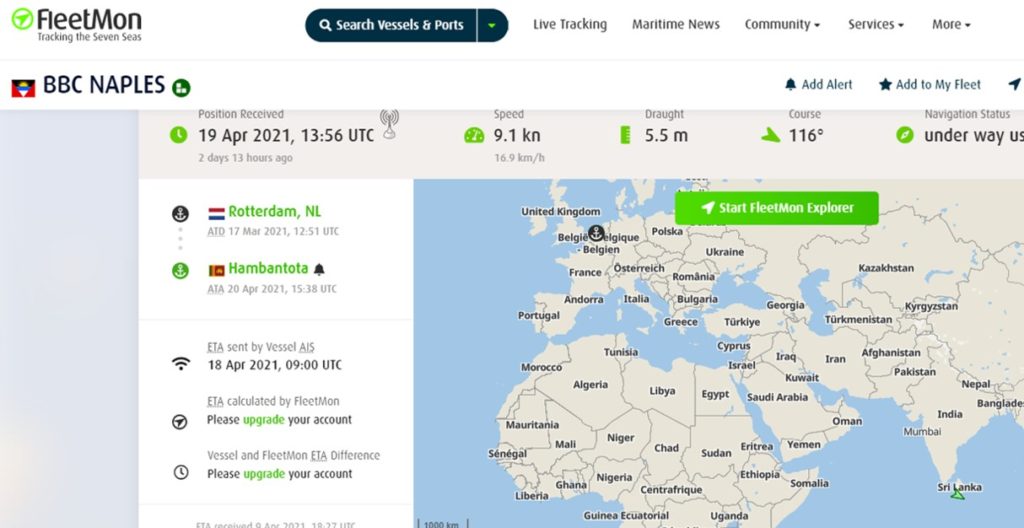 That isn’t by any means a smoking gun, especially since we’re not sure what that specific shipment is related to.

But it’s something any good analyst would highlight in the file, in light of the peculiar fact that the hazardous cargo went undisclosed when the ship made an unscheduled stop in Sri Lanka.  The interesting thing is that we’d almost certainly have heard nothing about it, if the UF6 had simply been declared in accordance with Sri Lankan requirements.

But for some reason, it wasn’t.  That can’t help appearing to matter, at a time when it seems like the same cast of characters keeps cropping up with fewer than six degrees of separation from every weird thing that happens.