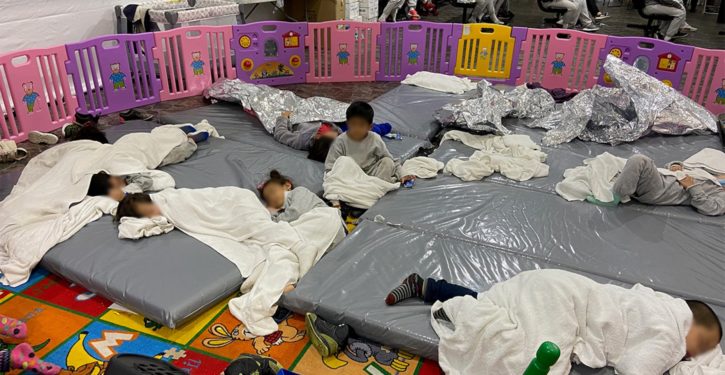 Border facility at Donna, Texas. All detainees look to be toddlers and infants (Image: Mike Braun)

Remember when a million dollars of government spending was considered a lot? Nowadays that amount is pocket change, provided the pocket belongs to big government and the cashier supervising the payouts is Joe Biden. According to Fox News, Biden is pumping $60 million tax dollars a week into housing the children of illegal aliens surging across the border as the number of these waifs soars to the highest level in American history. That level is expected to skyrocket further unless Biden puts on his big boy pants, admits his mistake, and restores President Trump’s border policies.

According to Customs and Border Protection (CBP), 172,000 illegal immigrants surged across the border in March alone, smashing all records. The number exceeds the previous record of 171,000 that came across the border in February. The latest numbers go far beyond any of the monthly numbers of border encounters recorded by the Trump administration and are also the highest in 15 years.

The number of unaccompanied migrant children has also exploded, increasing in March to 18,890, an increase of 100% over February.

Per the Associated Press:

The Border Patrol encountered 18,663 unaccompanied children in March, well above previous highs of 11,475 in May 2019 and 10,620 in June 2014. The agency started publishing the numbers in 2009. Before then, adults made up the vast majority of those crossing the border.

March’s count was roughly double the number of unaccompanied children encountered by the Border Patrol in February and more than five times the number in March 2020.

CBP March numbers are officially out. The agency encountered a record number of unaccompanied children at the border (18,890).

Of the migrants expelled, 28% tried to cross again, according to officials. pic.twitter.com/eLllqsUmJD

As for that $60 million figure reported earlier, Fox News notes:

That funding, which amounts to $3.1 billion per year, is used to care for children in facilities run by the Department of Health and Human Services (HHS) after they’ve been transferred from Border Patrol. Those costs are expected to rise dramatically over the coming months, according to a Washington Post analysis.

Your tax dollars at work! And all the “credit” goes to Joe Biden. The Trump policies that Biden canceled during his first hours in office effectively shut down illegal immigration and reduced human trafficking to a trickle. But Biden and his team of like-minded cronies didn’t care about the facts, and now they are playing catchup, recently announcing for example that they are considering resuming work on “Trump’s wall.”

The cost of housing migrant children at the border? $60 million. Remedially educating a 78-year-old so he can go through the motions of running a country? Priceless.

Republican AGs plan to create legal roadblocks for Biden agenda
Next Post
When is Kamala Harris finally going to go to the border? The short answer is she isn’t