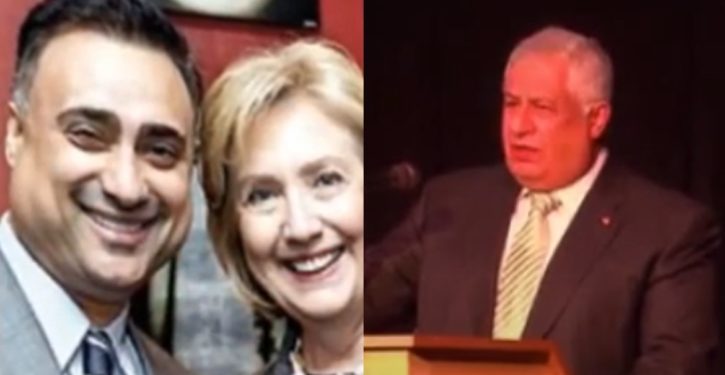 The political news seems to take considerable parsing these days, and is frequently illuminated by a bit of research.  It doesn’t even have to be very much; often, it requires little effort to track a keyword or name through to things that make you go, Hmmm.

Such is the case with a situation reported by John Solomon on 5 April at Just the News.  In his article, he highlights the legitimately YUUGE difference between the sentences of two men, political campaign donors, charged essentially with the same crimes.

One is Clinton Foundation donor Gilbert Chagoury, who was charged among other things with laundering foreign donations to Mitt Romney in 2012, and who passed through a foreign-sourced loan to Obama Transportation Secretary Ray LaHood (when LaHood was in office).  He “got a fine, no prison and deferred prosecution” for his offenses.

The other is top Democratic bundler, prolific donor to both parties, and Trump inaugural donor Imaad Zuberi, a Pakistani American, who was charged with laundering foreign donations to Obama and Obama’s evolving Organizing for Action between 2012 and 2016.

Zuberi, unlike Chagoury, “was sentenced to 12 years in prison and millions in fines.”  As John Solomon says, “Zuberi received one of the stiffest penalties ever for campaign finance and lobbying violations.”

But – Solomon again – “The cases have remarkable similarities. Both involved foreign straw donations and tax issues. Both were prosecuted by the same office, the U.S. attorney’s office in Los Angeles. And both men are reported to have provided significant assistance to the U.S. government.”

It’s quite noteworthy, as Solomon’s reporting suggests, that the media have been going out of their way to depict Zuberi as a Trump donor.  Apparently, the donation to the Trump inaugural is the only one Trump received from him.  (Zuberi contributed to the Trump Victory fund for the 2018 off-year election, in which Trump was not a candidate.)  Zuberi was also a major donor to the Obama inaugural in 2012; he was charged, in fact, with laundering the donation of a Saudi national to Obama’s inaugural fund.

Depicting him as a Trump donor amounts to misleading by omission.  Zuberi was far more active and high-profile as an Obama donor.  Notably, Zuberi was a co-chair of the fundraising committee for Obama for America starting in 2007, and continuing until the organization morphed into Organizing for Action (in 2013), when Zuberi joined the OFA board of directors.  He reportedly visited the Obama White House at least 13 times.

But he also made big contributions to both the Democratic and Republican Party organizations in the years from about 2007 to 2018.  (For a flavor of the balance, see here.)

In 2015, Foreign Policy did an in-depth report on Zuberi’s activities funneling money from foreign sources to Democrats in the U.S., with a focus on Sri Lanka and the timing of diplomatic events and actions there.

Zuberi was also accused of funneling foreign money from government officials in Turkey and Libya, as well as from other (non-government) nationals of Bahrain, Ukraine, and Pakistan.  After charges on these accusations were filed in 2019, federal prosecutors in Los Angeles said Zuberi tried to bribe witnesses to refuse to testify.

According to the AP report carried by a Fox station (link above), “The allegation that Zuberi acted as an unregistered agent for Turkey comes about a month after investigators probing his activities questioned a prolific Democratic Party donor who has ties to the administration of Turkish President Recep Tayyip Erdogan, according to law enforcement records reviewed by The Associated Press.”

There’s more “Democrat” than “Republican” on Zuberi’s rap sheet, when it comes to individual recipients.  That actually makes his case even more like Chagoury’s (which Peter Schweizer outlined in his book Clinton Cash).  There’s not much to choose between the two men in that regard.

But consider the seemingly tangential detail about Chagoury and Zuberi providing “significant assistance to the U.S. government.”

In the announcement of his deferred prosecution agreement, Chagoury was credited by the Justice Department for “unique assistance to the U.S. government,” though officials did not elaborate.

Multiple current and former U.S. officials confirmed to Just the News that Zuberi was a longtime U.S. intelligence asset whose assistance to American agencies was chronicled to the judge in his case in a Classified Information Protection Act (CIPA) filing, which remains under seal.

Recently, the CIA’s former top lawyer joined Zuberi’s team to assist in his appeal, signaling that elements in the intelligence community believe he was treated unfairly and that some of the events that led to his prosecution may have involved U.S. intelligence activities.

If I were a betting person, I’d at least consider a wager on who Zuberi knows things about, given his assistance to the U.S. government, and the origins and destinations of the foreign-money train he was driving.  It’s possible the stamp on him is “Knows too much to be left at large.”  It’s already obvious that touting him as a “Trump donor,” when that represents very little of his political-money oeuvre, is just a way of throwing up smoke around his case.

Of a piece with the screwball eruption over Gaetz?

This reminds me, indeed, of the whiff coming out of the bizarre Matt Gaetz situation, with its plot device of a seemingly ghoulish, off-the-wall push in March 2021 to raise millions in private funding for another go at retrieving CIA contractor Robert Levinson, who reportedly perished in Iranian custody more than a year ago.  The cast of characters surrounding the Levinson drama includes a handful of well-known names from Russiagate/Spygate.  That doesn’t seem coincidental, given the utter weirdness of the Levinson tragedy being dragooned into salacious allegations about Matt Gaetz.

It’s extremely interesting, as regards the Gaetz saga, that both of the latest interviews of persons connected with it have thrown intense suspicion on what exactly is going on.  A Gaetz staffer who just left Gaetz’s employment says his departure was misrepresented by the media (Ed Morrissey at Hot Air rightly says it looks like the media are “cooking” the narrative).  In fact, the aide’s impression seems to have been that the media may have cued the FBI to investigate Gaetz.  The staffer, when asked to interview with the Bureau, knew nothing about the allegations the FBI was working with.

Additionally, one of the principals allegedly involved in the seeming extortion attempt against Gaetz, Bob Kent, appears astonishingly untrustworthy in an interview with Chris Cuomo on CNN.

It’s worth watching the whole interview for the evasive vibe and uncomfortable pauses, as well as the unconvincing effort to explain that an extortion-worded communication was not an attempt at extortion, but merely a coincidental use of “rumors” about Matt Gaetz for the noble cause of raising money from Gaetz’s father to get Bob Levinson back.

It appears we may see quite a bit of this kind of thing in the coming days.  Whatever the big picture is of what’s going on here, it seems likely that the draconian sentence for Imaad Zuberi may have more to do with what he knows, and who he knows it about, than what he did.  Assistance to the U.S. government under one administration (i.e., in 2019) might not be appreciated by another one (in 2021).